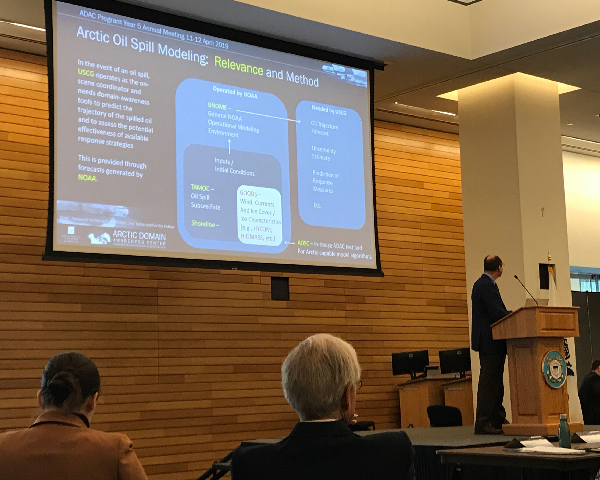 ADAC is a U.S. Department of Homeland Security Science and Technology Office of University Programs Center of Excellence in Maritime Research.

Due to multiple areas where NOAA provides direct support to Coast Guard operations, including in the oil and hazardous substance preparedness and response role, OR&R is an advisor on multiple research initiatives of the center, and benefits from ADAC’s strong focus on transition of research outputs to operations.

OR&R’s spill modeling via the GNOME suite provides the operational avenue for oil spill modeling research done through ADAC, and the research has enhanced NOAA’s ability to forecast the movement of oil in and under ice, as described in this ADAC video and project description.  Scott Lundgren provided positive feedback on the collaborative relationship alongside the U.S. Coast Guard project sponsor on the spill modeling research topic.

OR&R is also involved in other ADAC efforts presented at the meeting, such as subsurface and sub-ice oil monitoring with an autonomous underwater robot, called the Long Range Underwater Aquatic Vehicle.