For Accidents of Chemistry, a NOAA Tool to Help Predict and Prevent Disaster 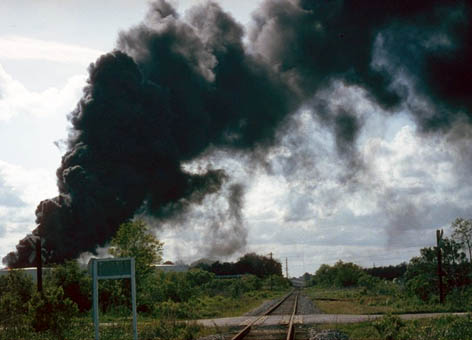 On April 10, 1995, at Powell Duffryn Terminals, Inc. in Savannah, Ga., a chemical tank storing turpentine exploded, triggering a scenario similar to our hypothetical example. The facility stored hundreds of thousands of chemicals in tanks. The explosion resulted in widespread public evacuations and extensive damage. Here, black smoke rises from the fire. (NOAA)

APRIL 3, 2013 — Imagine you're a chemical engineer in charge of safety at a chemical storage facility supporting the pulp and paper industry. You're having a normal day when—suddenly—there has been an explosion. It has affected three of the large tanks on the property.

One tank, containing sodium hydrosulfide (NaHS), is damaged and leaking. Sodium hydrosulfide is a chemical used to break down cellulose, the fibrous ingredient in plant cell walls, into pulp, making it a key chemical in the paper industry. The tank next to it, also damaged by the explosion and now leaking, holds a tank-cleaning solution that contained the corrosive chemical hydrochloric acid (HCl). The third tank, the one that caught on fire and caused the explosion, contained a petroleum distillate material. It damaged the first two tanks, causing their contents to drain into a common area and resulting in a combination of sodium hydrosulfide and hydrochloric acid.

How would you communicate this scenario—and its potential dangers—to the emergency responders who are on their way to the scene? During chemical accidents, there are frequently many unknowns: What was released? Did it mix with anything? What might happen? NOAA's Chemical Reactivity Worksheet is a free software program you can use to find out about the chemical reactivity of thousands of common hazardous chemicals and predict the hazards associated with mixing two materials together. (Reactivity is the tendency of substances to undergo chemical change, which can result in hazards—such as heat generation or toxic gas byproducts.)

By consulting the Chemical Reactivity Worksheet, you, the safety officer, would quickly learn that when sodium hydrosulfide and hydrochloric acid combine, hydrogen sulfide (H2S) gas could result. That gas is both toxic and highly flammable—possibly creating a very dangerous situation. To protect public safety, the affected area would require immediate evacuation. 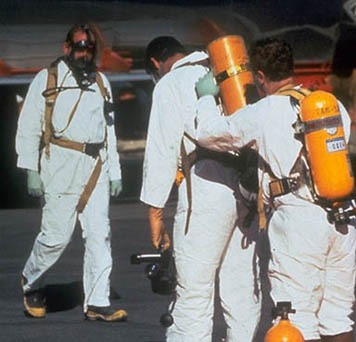 A new version of the Chemical Reactivity Worksheet (version 3.0) has just been released and is available for download at http://response.restoration.noaa.gov/reactivityworksheet. The latest version is a combination of the latest reactivity information and expert knowledge from NOAA and Dow Chemical. The free software predicts potential hazards from mixing chemicals and is designed for use by safety planners and the chemical industry. It is a tool that is intended to help to prevent accidents at chemical facilities and, once an accident occurs, to give valuable information about the possible hazards associated. The work was done as part of NOAA and the U.S. Environmental Protection Agency's joint development of the CAMEO software suite, which provides valuable emergency response and planning tools for releases of hazardous materials. The Center for Chemical Process Safety also contributed to the project.