Exploring the Use of Drones for Oiled Shoreline Assessments

OCTOBER 21, 2016--OR&R’s Emergency Response Division, California’s Office of Spill Prevention & Response (OSPR), and the U.S. Coast Guard teamed up with Chevron to explore the utility of unmanned aerial systems (UAS, a.k.a. drones) as a reconnaissance tool for shoreline oiling.

Normally during oil spills, the nature and extent of shoreline oiling is determined by ground-based surveys using the Shoreline Cleanup Assessment Technique (SCAT). In situations when shorelines cannot be safely accessed (heavy surf conditions, rocky outcroppings, cliff or bluff bases, etc.) or may include especially sensitive habitats (such as marshes), SCAT may be limited to conducting helicopter-based, ground-based binocular surveys, or no surveys at all.

Emerging technologies such as drones may become an important element in future SCAT survey efforts, so it is critical to evaluate how to efficiently incorporate these data-gathering tools in a way that is most effective. The surveys used both traditional SCAT ground teams and several drone configurations (fixed wing and multi-copter platforms with various sensors and flight patterns) to characterize surrogate oil targets on different shoreline types (beach, rocky and marsh) and also look at data flow and visualization issues (processing times, formats, ERMA). Drones were deployed from land and boats to gather and transmit SCAT data streams of varying complexity (from annotated still images to live-streaming video).

At completion, we hope to have a far better idea of what the future of SCAT operations might look like and how to most effectively use these fast emerging technologies. 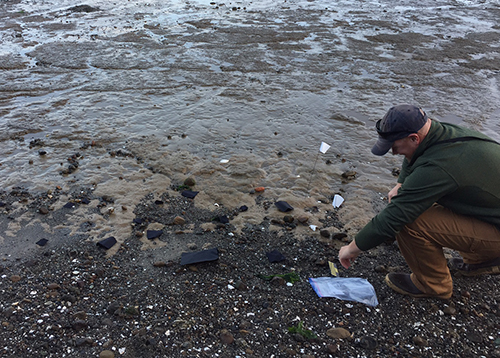 Deploying surrogate oil targets in the intertidal zone of Point Pinole Regional Park in preparation for the day’s drone flyovers. (NOAA)
Return to OR&R Weekly
Back to top