OR&R joined to participate in discussions on two topics - common operating pictures and spill response countermeasures. Robb Wright from OR&R's Spatial Data Branch participated in a review of a recent Arctic oil spill exercise and use of the Emergency Response Management Application (ERMA) as a Common Operational Picture (COP), and the Emergency Response Division Chief, Scott Lundgren, and the OR&R Senior Scientist, Dr. Lisa DiPinto, participated in a discussion of dispersant preparedness.

As part of the exercise review, OR&R discussed the use of ERMA as the Common Operational Picture during the drill, which was able to bring in public and sensitive data layers relevant to the spill scenario in Norway using several of Norway’s servers as data sources. In the coming months OR&R will continue coordination with data managers from Norway and Canada to ensure that data can pass between respective systems easily during an international event. Each of the three countries presented interesting research and development projects related to oil spill recovery technologies.

In the discussion on dispersant preparedness, OR&R presented the Arctic Dispersant State of the Science effort being coordinated by the Coastal Response Research Center and presented and discussed the scope of the Deepwater Horizon Natural Resource Damage Assessment and some specific work that relating to dispersants and dispersed oil. Other participants shared information regarding the International Maritime Organization's dispersant guidelines as well as other exercise and training opportunities. 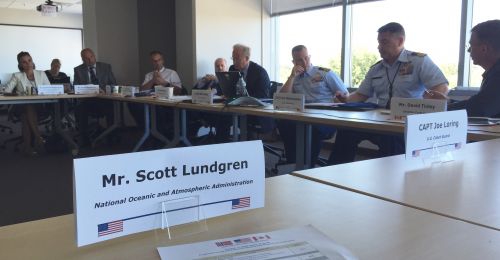 (NOAA)
Return to OR&R Weekly
Back to top