NOVEMBER 4, 2019 — In early October, members of the CAMEO® software team attended two conferences in Houston, Texas, to get feedback from emergency planners and responders on our CAMEO software and to stay up to date on issues surrounding hazardous material response. 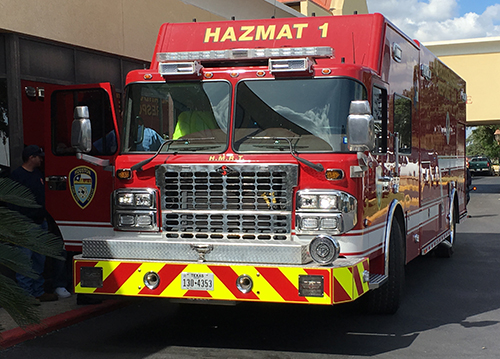 The CAMEO software suite is a set of tools designed to assist emergency planning and response, especially for those events related to hazardous chemicals. The CAMEO team uses the Human Centered Design process to build their products, and connecting with users to learn about their needs and “pain points” is an important step in this process.

The first conference the CAMEO team attended was the mid-year meeting of the National Association of SARA Title III Program Officials (NASTTPO), an organization of state and tribal emergency response planners. Members of the EPA and NOAA, who have partnered to create the CAMEO software suite for over 30 years, were both present at the conference. The second conference was Hotzone, a key conference for first responders, where they can receive hands-on training, hear case studies and lessons learned from their peers, and learn about the latest technologies related to hazardous material response. This year the Hotzone conference celebrated its 20th anniversary and drew over 600 attendees from around the country.

Throughout the conferences, the CAMEO team spoke with users of the CAMEO products, logged feature requests, and tested new software with users to identify opportunities to make the programs run more smoothly for users. Additionally, the team heard updates on hazardous material legislation, updates and best practices from the Chemical Safety Board, Environmental Protection Agency, Department of Homeland Security, and other government agencies. CAMEO NOAA team members, Brianne Connolly and Kristen Faiferlick, gave a presentation on ongoing development efforts in the CAMEO suite.

The CAMEO software suite was featured prominently at the Hotzone conference, with a day-long pre-conference workshop focused on CAMEO basics for hazmat responders, an advanced class focused on geospatial techniques in MARPLOT® and how to share information with other common mapping programs like Google Earth and Esri’s ArcGIS, and an advanced class on using the ALOHA® air dispersion model. Additionally, there was a class focused on case studies from previous spills, which helped users consider the output from various air dispersion models and how that compared to the actual incidents.

This winter, the CAMEO team will be releasing a completely redesigned reporting product for facilities that store hazardous chemicals. This tool, called Tier2 Submit™, is available in beta form for testing and will be finalized in early December 2019.