NOVEMBER 2, 2020 — Over the past several weeks, members of the CAMEO® team participated in the virtual Fall 2020 National Association of SARA Title III Program Officials (NASTTPO) Conference, a meeting for members of the hazmat planning community to share best practices, hear updates on hazmat regulation and policy, and learn about tools and aids to help in hazmat management and response. 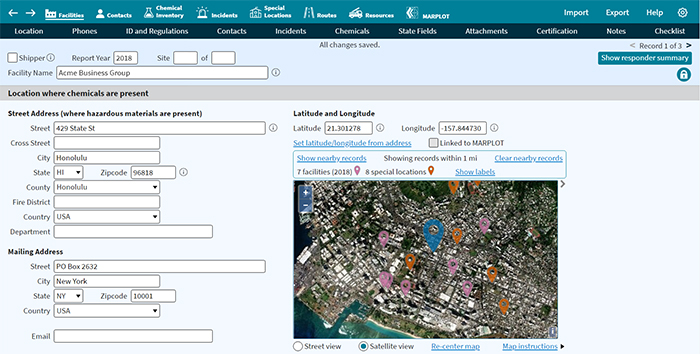 A screenshot of the beta version of the new CAMEO Data Manager program. Image credit: NOAA.

Traditionally, this annual conference is a multi-day event held each fall in Houston, Texas, that attracts attendees from across the United States. In light of travel restrictions and safety considerations this year, the developers reimagined the conference as a series of webinars throughout the fall to ensure that key updates could still be shared with the hazmat community. Attendees at the conference typically come from at least six different time zones, so splitting the event onto multiple days helped make the sessions more accessible to the full community.

The CAMEO team, who develop a set of tools to assist chemical emergency planners and responders, was asked to be one of the key speakers for the third webinar in the series, which was hosted on October 20. Kristen Faiferlick provided an overview of the CAMEO software suite, updated the community on recent and upcoming releases, and then gave a live demonstration of the beta version of the redesigned CAMEO Data Manager. Several other team members were present to field questions from the community about the suite.

CAMEO Data Manager is the next generation replacement for the soon-to-be retired CAMEOfm. This desktop program is a tool for managing data about chemicals stored or transported in communities, especially data required under the Emergency Planning and Community Right-to-Know Act (EPCRA). Nearly 100 conference participants watched as the team demonstrated and discussed the new features in the redesigned software program, including a quick view for responders, a specialized report to help planners see what new chemicals are present in their area since the previous year, and a map to visualize the location of facilities with hazmat chemicals.

The other speaker at the October 20 webinar was the Environmental Protection Agency (EPA), and several staff members shared updates related to chemical reporting and regulation. The CAMEO suite has been built in partnership with the EPA over the last 30 years, representing a decades-long partnership between two government organizations with similar goals of protecting the environment and the communities that depend on them.