AUG. 8, 2022 — Two OR&R scientists were recently recognized with a prestigious Department of State Honor Award for their work as part of the National Response Team (NRT) supporting environmental crises in other nations. 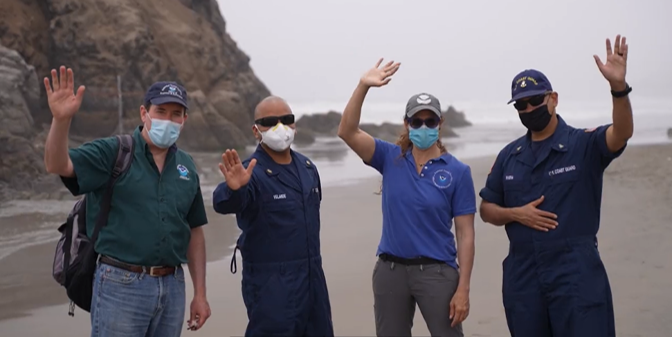 The award is in recognition of John and Brandi’s sustained outstanding performance and significant contributions to the development of the National Response Team International Assistance Subcommittee, including putting into effect the International Assistance Guide. Their accomplishments resulted in critical assistance to 11 nations and one international exercise, which demonstrated the dedication of the U.S. government to provide support to nations facing environmental crises.

John and Brandi served as members of the NRT deployment team for an oil spill north of Lima, Peru in February 2022. In addition, the OR&R spill response team has played key roles in nearly a dozen international environmental incidents where U.S. assistance was sought and provided. Some of the significant incidents included oil spill response planning, training, and spill exercise for Guyana’s Civil Defense Commission in April 2022; the fire and eventual sinking of the container ship X-Press Pearl off the coast of Sri Lanka in 2021; an environmental emergency in Mauritius in 2020, when the bulk carrier Wakashio ran aground on a coral reef; and the sinking of an oil tanker in a UNESCO World Heritage site in Bangladesh in 2014.