Fire on the F/V Aleutian Falcon in Tacoma

February 22, 2021 — Early on February 18, 2021, the USCG notified the NOAA Scientific Support Coordinator (SSC) for the region of a major vessel fire in the Hylebos Waterway in Tacoma, Washington.  A fire had broken out shortly before midnight aboard the 233-foot Aleutian Falcon at Pier 25 in the Port of Tacoma. 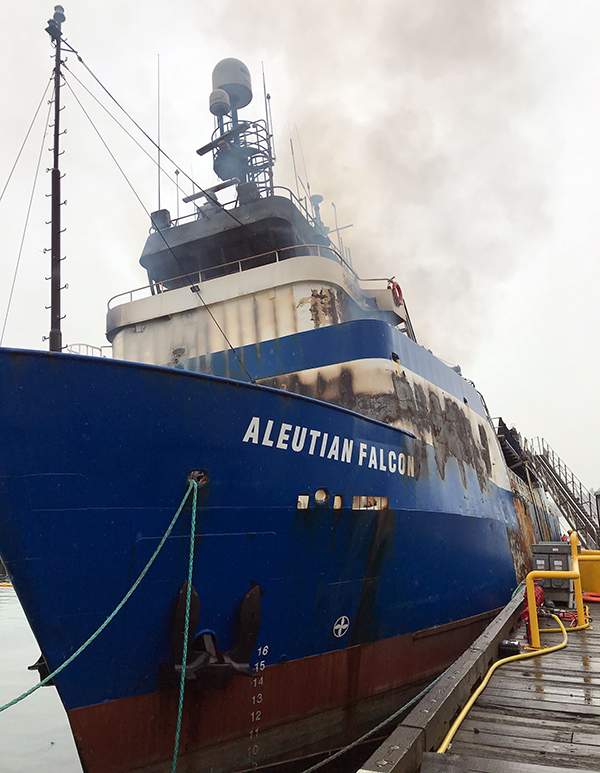 The seafood processing vessel is owned by Trident Seafoods and used to process herring and salmon seasonally in Alaska. It has a potential fuel capacity of 107,000 gallons but approximately 50,000 gallons of diesel were believed to be onboard.  The vessel also has hazardous materials on board, including approximately 9800 lbs. of ammonia and 200 lbs. chlorine. The fire damage has yet to be fully assessed, but according to local media reports, the company expects the vessel to be a total loss.

As of Friday, February 19, the fire continued to burn and there was still smoke in the air. The plan for Friday is to safely fight the fire and continue to stabilize the vessel. Once those two objectives are achieved, the hazardous substances will be removed. Removing the fuel is also an objective, but a decision about when that may happen has not yet been made.

A response contractor has assumed the lead role for salvage and firefighting. On Friday, Tacoma Fire was still on scene directing those operations and positioned to provide backup.

Air monitoring continues. With earlier monitoring results, there was no detection of ammonia or chlorine and particulate levels remain consistent with winter background levels.

NOAA continues to provide the U.S. Coast Guard with scientific support, including chemical hazards, weather, tides, and resources at risk.