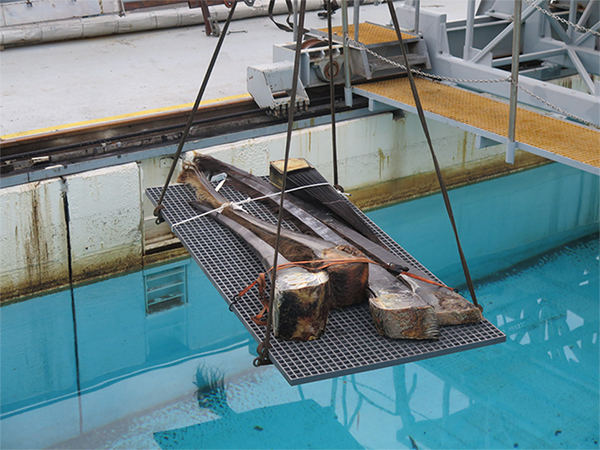 A talk by Gary Shigenaka was a featured presentation for the workshop, and summarized a novel cooperative project conducted around five years ago at the OHMSETT research test tank located in Leonardo, NJ.  The project investigated the effects of crude oil, dispersed oil, and dispersants on the physical performance of whale baleen.  Baleen plates filter prey organisms like krill and small fish in many whale species' mouths.  While oil and dispersant effects on baleen had been studied in the 1980s, renewed interest in Arctic oil exploration and production also revived concerns about potential impacts to important species like the bowhead whale.

Whaling captains in the Alaskan Arctic community of Utqiaġvik donated sections of bowhead whale baleen and the North Slope Borough Department of Wildlife Management coordinated the substantial logistics of shipping it from the North Slope to New Jersey.  OHMSETT engineers worked with scientists from NOAA, the North Slope Borough, and Woods Hole Oceanographic Institute to mount the whale baleen to test platforms and equipment in the three million gallon tank, where oil, dispersed oil, and dispersants were applied to the baleen and measurements were taken to determine if the treatments affected flow through the baleen.

Alan Mearns reached back into history with a presentation on the February, 1997 MV San Jorge 1.5 million gallon crude oil spill in Uruguay that impacted the 160,000 population Fur Seal colony at Isla de Lobos in Uruguay.  The incident, in the heat of austral summer,  resulted in the deaths of over 4,500 Atlantic Fur Seal pups and nearly 200 adults.  The U.S. State Department requested assistance and three NOAA scientists, former SSC Ed Levine, ERD ecologist Alan Mearns,  and National Marine Mammal Laboratory’s Thomas Loughlin (all three now retired), were dispatched to Montevideo.  The NOAA scientists joined an international team who provided guidance on cleanup of the rocky island.

The most important guidance was to avoid stampedes which would further result in additional deaths and spreading of oil: no mechanical equipment, no pressure washing, no overflights, minimal human presence.  The cleanup mainly involved absorbents, using 60 tons of Canadian peat moss distributed and removed carefully by small teams of trained armada personnel.  Dead pups were buried on site and treated with quicklime.  Despite the tragic loss of a major portion of the 1997 pups, a subsequent Natural Resource Damage Assessment (NRDA) review indicated that the population was recovering.  Following the incident, NOAA recommended that peat be staged at the Pribilof Islands in the Bering Sea, where it is now maintained in the event of an oil spill impacting those colonies.

Recordings of the Opening Lineup presentations are available online on the Washington Dept. of Ecology website.