JUNE 3, 2019 — On Thursday May 23, OR&R staff gave brief presentations on their work to Benjamin Friedman, NOAA’s Deputy Under Secretary for Operations, who serves as the agency’s chief operating officer and is responsible for the day-to-day management of NOAA’s national and international operations for oceanic and atmospheric services, research and coastal and marine stewardship. 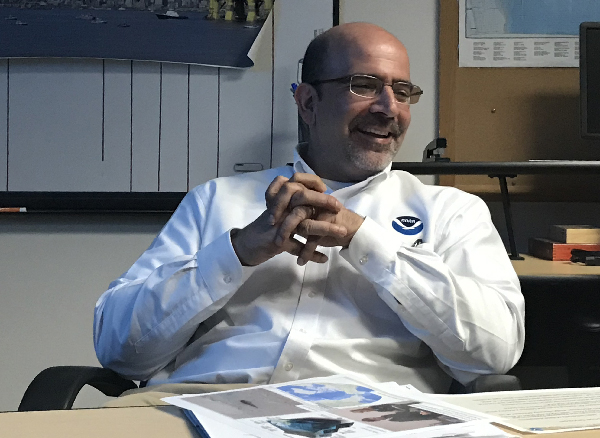 While on NOAA’s Sand Point (Seattle) campus last week, Ben sat down with Marla Steinhoff, Mark Dix, Ben Shorr, and Doug Helton to hear about OR&R work being done on the West Coast and Alaska.

Marla Steinhoff, an environmental scientist, discussed the status of two ongoing local cases, the Lower Duwamish River in Seattle and Portland Harbor in Oregon. The sites, both polluted by long term exposure to industrial contaminants, are both moving towards litigation. Marla discussed the Natural Resource Damage Assessment process for both these cases, as well as working with the numerous responsible parties, tribes, local government entities, and trustees.

Ben Shorr, a physical scientist whose work focuses on data management and visualization tools, spoke about OR&R’s DIVER (Data Integration, Visualization, Exploration, and Reporting), the data warehouse and query tool providing natural resource trustees and the public with the ability to access, query, visualize and download extensive information on environmental pollution, sampling, and restoration efforts. Ben also discussed ERMA (Environmental Response Mapping Application), an online mapping tool that integrates both static and near real-time data in a centralized, easy-to-use format for environmental responders and decision maker that OR&R developed jointly with the University of New Hampshire. His focus was on the value of these tools to the NRDA process.

Doug Helton, incident coordinator, spoke about spill preparedness in the Arctic region, including the state of the science concerning the use of oil dispersants in the event of a major spill. Doug also talked about his work on the Emergency Prevention, Preparedness and Response (EPPR) workgroup of the Arctic Council, the importance of OR&R’s Arctic ERMA, and OR&R’s role as NOAA representative to the Alaska Regional Response Team.