JANUARY 11, 2021 — On January 6, the OR&R director, Scott Lundgren, along with staff from OR&R headquarters, Marine Debris Program, Emergency Response Division, and the Coastal Response Research Center provided a briefing for the new director of the National Weather Service Ocean Prediction Center as well as senior and interested staff from the Center. 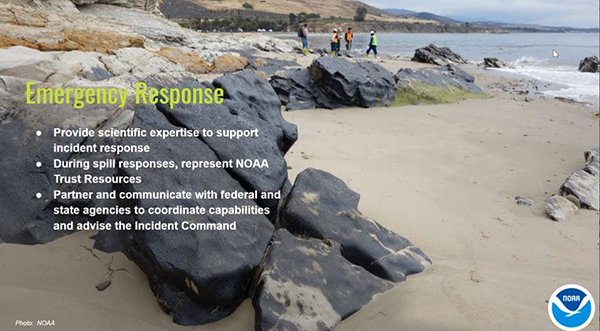 Both offices support the blue economy with services for the maritime community relating to the prevention of and response to the consequences of incidents. The Ocean Prediction Center’s role is the prevention of loss of life and property at sea through provision of timely and accurate marine weather warnings and forecasts. OR&R is involved in certain maritime incidents as we protect and restore ocean and coastal resources from the impacts of oil, chemicals, marine debris, and other hazards.

The briefing was arranged subsequent to connections following an incident involving a particularly large loss of containers from a container ship on a trans-Pacific crossing, and allowed discussion of connections between the offices, the scope and drivers of OR&R involvement in Emergency Response and Marine Debris incidents, as well as recent work involving oil and ice modeling communities under the Arctic Marine Spill Modeling project.