NOVEMBER 17, 2017 — Across the globe there are concerns about oil pollution in coastal waters, same as in the U.S. 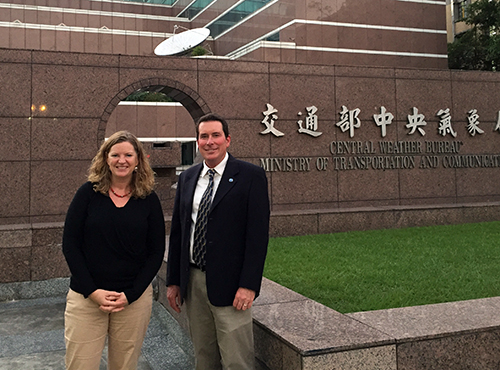 During a recent symposium in Taipei, Taiwan, responders from OR&R's Emergency Response Division (ERD) consulted with government officials, scientists and university researchers about coastal oil spills. Taiwan has established an oil spill response program centered on some of the best ideas and training from governments and industry around the world.

Hence, the Symposium of Marine Meteorology Service for Ocean Oil Spills, Nov. 1-2, 2017. The objective was to enhance Taiwan's oil spill emergency response technologies and protocols. It focused on ocean oil spill management and modelling techniques for response and planning that are currently in use and or development that can decrease oil spill damage to coastal communities and habitats. ERD participants included Dr. Amy MacFadyen, who presented on oil trajectory modeling, spill support tools, oil fate and effects issues; and John Tarpley who presented on the US spill response structure and NOAA's role in oil spill response.

The symposium was sponsored by the Central Weather Bureau of Taiwan (CWB) and National Cheng Kung University. It was coordinated through NOAA's Office of Ocean and Atmospheric Research, Global Systems Division, who has an agreement with Taiwan CWB. The initial connection between the CWB and ERD, and funding was made possible via that agreement. Dr. Fanthune Moeng of NOAA OAR was instrumental in supporting and coordinating this symposium.