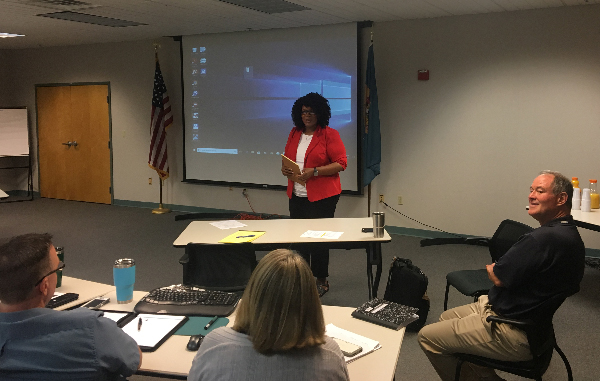 The objective of the meeting was to bring together our community of practice working on revitalizing and restoring urban water communities, addressing social impacts and enhancing cohesion, stimulating economies, and restoring habitats/natural resources of the urban Delaware River. This freshwater tidal area has specific significance for NOAA trust resources including endangered species (eg., Atlantic Sturgeon), migratory fish (eg., American shad) and is one of the most populated areas in the country whose history spans from the founding of the nation through the industrial revolution to modern day revitalization. Several environmental justice communities developed as part of the post-industrial revolution and general urban decline of the late 20th century. The urban Delaware River has significant fishing and swimming restrictions and other environmental impacts, including increased climate vulnerability that strain these communities. However, significant progress is being made in addressing these impacts and the Urban Water Federal Partnership has facilitated tens of millions of dollars being directed to these impacts. NOAA has helped with grant writing, reviews, etc. and other funds and support have been generated through Natural Resource Damage Assessment (NRDA) actions and other sources.

Organizations and partners from the cities of Camden, New Jersey; Philadelphia; Chester, Pennsylvania; and Wilmington, Delaware came and gave updates of urban river revitalization projects that have been supported by the Urban Water Federal Partnership. These include the Delaware River City Corporation and Riverfront North (Philadelphia), the Partnership for the Delaware Estuary, The Nature Conservancy, Trust for Public Land, City of Wilmington, Camden County Municipal Utility Authority, Brandywine Shad 2020, Riverfront Alliance of Delaware County (Chester), and the Pennsylvania Horticultural Society. These on-the-ground projects include, but are not limited to commercial riverfront redevelopment incorporating climate resilience and adaptation, habitat restoration including tidal wetlands, water quality projects and green infrastructure, dam removals for fish passage, living shorelines, urban wetland parks and trails, and water based recreation.

The group identified potential focus areas and subjects (examples of transportation and infrastructure upgrades and housing integration) for future meetings which were requested by the group on a two – three times per year basis.

This group has been in existence since 2011. OR&R’s Simeon Hahn and Frank McLaughlin of the New Jersey Department of Environmental Protection serve as co-chairs of the work group.