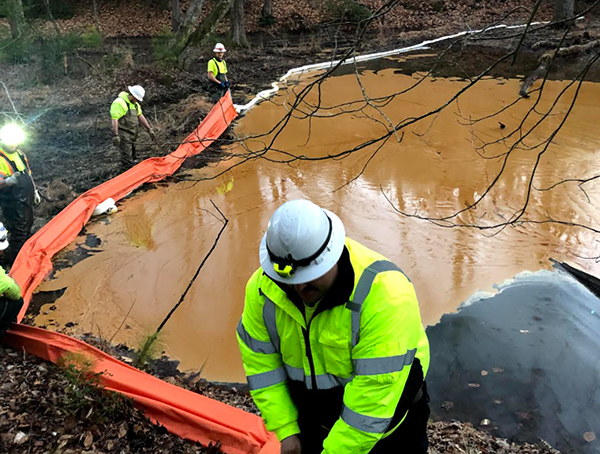 A clean-out on the top of the tanker ruptured, releasing used cooking oil to a nearby storm water drain which then impacted Lewis Creek, which flows along the southern boundary of a private wildlife management area and is a tributary to the Rappahannock River. The estimated volume of oil released is in a range of 2,000 to 3,000 gallons.

Tappahannock/Essex Volunteer Fire Department and Essex Emergency Services were the initial responders. The initial response actions included using a wooden plug to stop the leak, placement of boom and straw bales, and construction of a dam across storm water drain and ditch. Virginia Department of Environmental Management (VDEM) and the Department of Environmental Quality also responded to the initial incident. At this time, the Virginia Department of Environmental Quality (VDEQ) notified and consulted with NOAA's scientific support coordinator (SSC), who provided recommendations on methods to conduct assessments of the surface water, wetlands, and shoreline, information on plant and wildlife conditions at this time of year, expected behavior of the oil, and potential impacts of the vegetable oil on plant and wildlife. The oil layer is expected to stress amphibians and aquatic life. Insects, leeches, frogs, peepers, and turtles have been observed leaving the ponds. Waterfowl have been observed in and around Lewis Creek and the adjacent wetlands, but with no visible impacts.

The responsible party, owners of L&J Family Trucking Company, hired First Call Environmental. Due to access issues (e.g., steep terrain, water velocities and limited daylight), no additional defensive actions were possible. The following day, the VDEM and VDEQ discovered a series of three or four beaver dams and that most of the oil had been captured behind the second beaver dam. At the mouth of Lewis Creek is an extensive wetland area. At the recommendation of the NOAA SSC, additional response actions have been focused on ensuring containment and removal strategies.

At the request of VDEQ, the NOAA SSC then recommended a series of response actions to implement, such as booming of the mouth of Lewis Creek to prevent the vegetable oil from entering the Rappahannock River where a diverse variety of NOAA trust resources, such as finfish, shellfish and wetland habitats can be found. Additional response actions that the NOAA SSC recommended included vacuuming, placement of sorbents, oiled debris removal, low-pressure ambient water flushing of the impacted embankment, the physically herding of the floating, emulsified oil where it had accumulated in the ponds created by the beaver dams which then could be vacuumed up and removed, and if needed, the use of hazing techniques to relocate waterfowl and other wildlife from the impacted area.

Upon the request of the VDEQ, the NOAA SSC also recommended a set of clean-up endpoints that included that the stream be free of floating oil, the removal of oiled debris, and the removal of any soil saturated with the oil.

At the time that this article was written, response actions are on-going. The spill response is being overseen by a Unified Command which includes the VDEQ, VDEM, U.S. EPA, and the U.S. Coast Guard. The NOAA SSC is a member of the Environmental Unit.

For additional information or updates on the spill response, contact Frank.Csulak@noaa.gov. 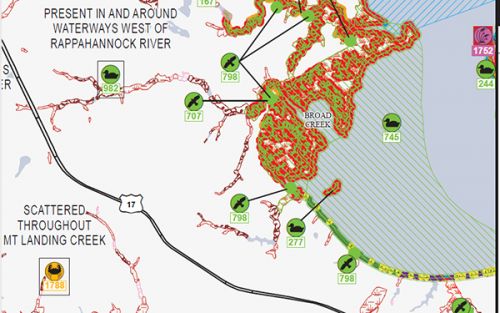 Image credit: NOAA.
Return to OR&R Weekly
Back to top