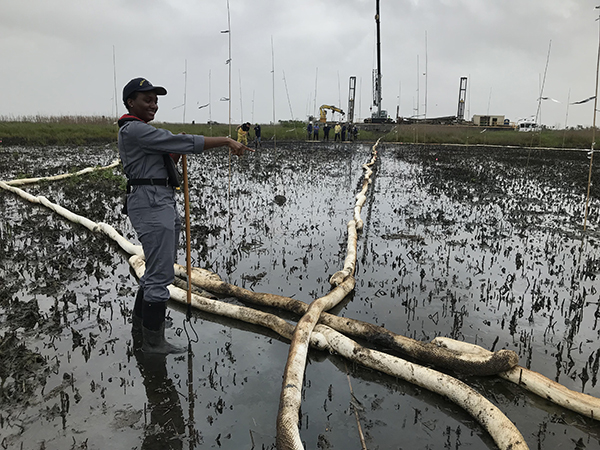 The federal and state emergency response team decided that an in-situ burn would be the most effective response technique to remove the oil from the environment. Natural resource trustees agreed, and the in-situ burn took place on August 21, 2019. USCG has conducted several in-situ burns over recent years and most burns are successful at removing the oil. Rebound of the marsh vegetation is typically apparent after a few growing seasons.

Enter 2020. Typical regrowth at the burn site? Nope. More than one year post-burn, the vegetation has yet to show signs of a strong comeback.

A follow up visit to the site of the burn conducted in March of 2020 was a disappointment for the response team. NOAA Regional Response Officer LTJG Lola Ajilore, encountered a thick layer of algae smothering the majority of the burn site and underlying marsh soil still sopping with oil. Very little new vegetative growth was found in the impacted area. This marsh was not rebounding.

The response team discussed two factors that could be preventing the vegetation from coming back: Salt and algae.

Salt: The unknown amount of produced water spilled in this area likely created hyper saline soils and little chance for a rebound over the next several years.

Algae: The opportunistic algae was very thick and covered nearly 100% of the impacted area. Marsh grasses would find it difficult to reclaim their piece of real estate in these conditions and the algae prevented oil trapped within the soil from gaining exposure to the elements, thus slowing the natural degradation processes.

The response team decided that removing hyper saline marsh soil was a very invasive technique and would do greater harm than allowing for natural recovery over several years. The team decided to tackle the algae instead.  Unsure if algae was the culprit for the less-than-stellar vegetative regrowth, the team decided to divide the impacted area into three treatment zones: algae removed, algae disturbed and no treatment. The team would return in several months to reassess the site.

In over a year’s time, Mother Nature has managed to restore just a few tufts of grass within the footprint of the spill.  It is obvious that our various algal treatment methods did not affect the outcome of growth in each zone. On a brighter note, and probably the only bright note of this particular spill, the oil trapped within the marsh soil has been reduced to a very slight sheen with a few scattered droplets here and there, only released when the soil is disturbed. Other nearby burn sites have recovered marvelously with this amount of oil lurking around.

Salt kills. It’s unfortunate to lose what was once a healthy bit of marsh in an area that is experiencing so much shoreline loss already. This patch of nature may take a decade or more to recover – if it ever recovers – and there isn’t much we can do to assist. NOAA, USCG and our state counterparts will keep a watchful eye over this site over the coming years with the hopes that Mother Nature eats her Wheaties and “shows up clutch.” 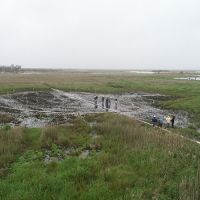 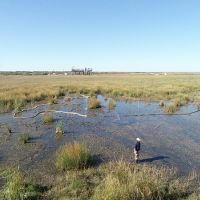 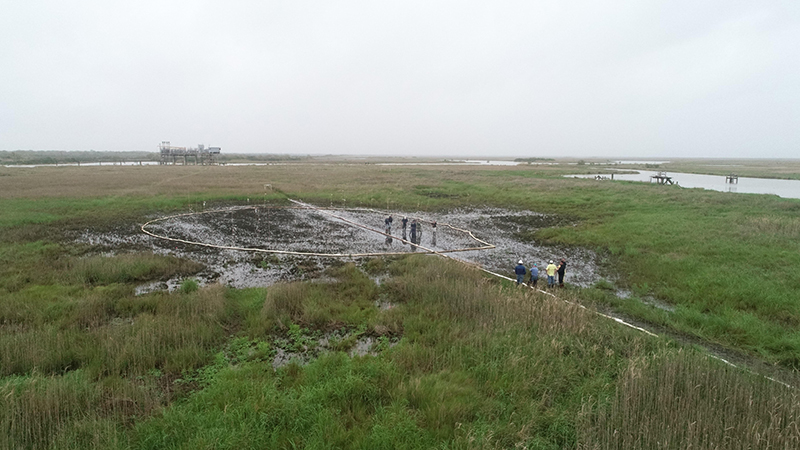 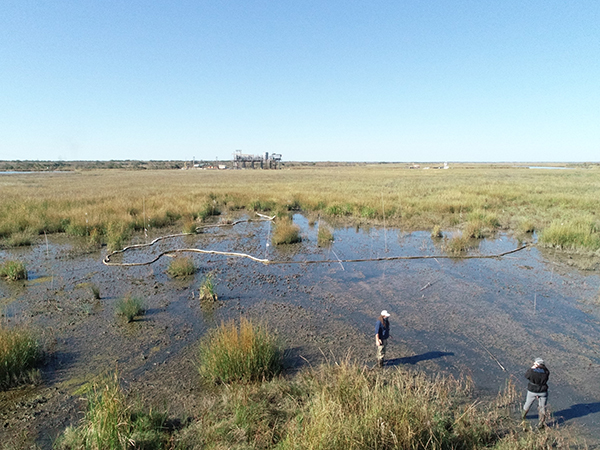