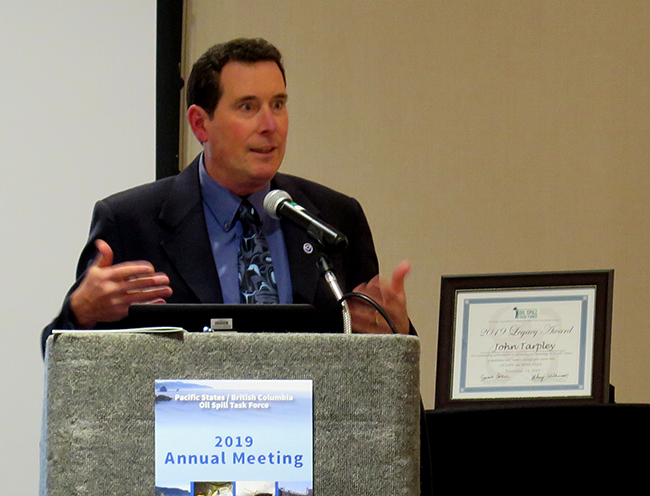 This award recognizes John’s significant and long standing contributions to the spill response community in the Pacific Basin as well as nationally and internationally. John also spent over 12 years working for the California Office of Oil Spill Prevention and Response (OSPR) prior to joining NOAA in 2005 and his former employer submitted a hearty endorsement of his nomination as well. Some of the noteworthy response incidents he has managed include: potential damage to fuel storage tanks from impending Super Typhoon Ioke on Wake Island in 2006; the 2007 Cosco Busan allision with the San Francisco Bay Bridge pier (for which he also served on the subsequent Incident Specific Preparedness Review team); the 2013 molasses spill in Honolulu Harbor, Hawaii; the grounding of the drilling rig Kulluk on Sitkalidak Island, Alaska in 2013; and the 2015 pipeline rupture that impacted Refugio State Beach in Santa Barbara County.

Over the years, he has shared his knowledge, helping to develop and train hundreds of responders. He was a panelist at the 2010 Oil Spill Task Force Annual Meeting, he presented a keynote address at a public workshop hosted by the National Academies of Sciences, Engineering, and Medicine to explore research needs and other opportunities for improving public health response and protection before, during, and after oil spills. He has developed, supported, and taught on topics to better prepare spill planners and responders including at NOAA’s Science of Oil Spills and Shoreline Cleanup Assessment Technique classes and Environmental Unit short courses at the International Oil Spill Conference. Beginning in 2009, with others from CA OSPR, the Environmental Protection Agency, and other agencies, John and the collaborators completely overhauled NOAA’s Shoreline Cleanup and Assessment Technique (SCAT) program, which is a systematic method for surveying an affected shoreline after an oil spill.

Five members of the Emergency Response Division attended the meeting which also included a keynote address from the former governor of Washington State, Christine Gregoire, perspectives on the 30 year history of the task force, highlights from all the members of the task force, a panel on abandoned and derelict vessels, as well as a presentation by George Galasso of the Olympic Coast National Marine Sanctuary and the establishment of the “Area To Be Avoided” overlaying the Sanctuary.