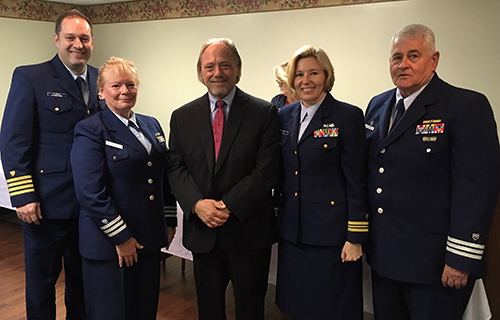 The “Change of Watch” is a time honored tradition. This ceremony reinstates the continuity of the authority of command.  It is a formal and sobering ritual, conducted before the assembled company of the organization, as well as honored guests and dignitaries. The “Change of Watch” itself is a transfer of responsibility and authority from one individual to another. This ceremony is the equivalent of the active Coast Guard’s “Change of Command.”

“Not knowing much about the Auxiliary prior to the ceremony, it was quite an honor for me to be asked to serve as the Program Speaker before such a distinguished and dedicated group of individuals,” stated Frank. “These individuals donate their time and passion for public service to make our waterways safer and more enjoyable.”

For those individuals who may not be familiar with the history of the Auxiliary, Congress initially created the Coast Guard Auxiliary as the Coast Guard Reserve in 1939. They were trained as volunteer forces to augment active duty Coast Guard forces, working primarily with recreational boating. In 1941, Congress changed the Civilian Reserve to the U.S. Coast Guard RD Auxiliary for those individuals not able to engage in combat support or not eligible for military service for age or health reasons. By 1943, the Auxiliary took up more civilian duties, such as recruiting, blood drives, coastal patrol, and serving as Coastwatchers.

Recreational boating safety remained the Auxiliary’s focus from the 1950s until the early 1990s.  Around 1990-1991, the U.S. Coast Guard began to integrate the Auxiliary into day-to-day operations augmenting Coast Guard offices, flying as observers, inspecting commercial fishing vessels, and qualifying as Coast Guard boat crew.  In 1996, the Coast Guard Appropriations Act of 1996 specified that, “The purpose of the Auxiliary is to assist the Coast Guard as authorized by the Commandant, in performing any Coast Guard function, power, duty, role, mission, or operation authorized by law”.   The use of qualified Auxiliarists allows the Captain of the Port (COTP) to make more effective use of their staff and resources.