MAY 4, 2020 — Scientists from the Northwest Fisheries Science Center (NWFSC) Ecotoxicology Program and OR&R traveled from Seattle to Newport, Oregon, to join local scientists at the NWFSC Hatfield Marine Center to process more than 1400 juvenile Chinook salmon in a one day sampling intensive. 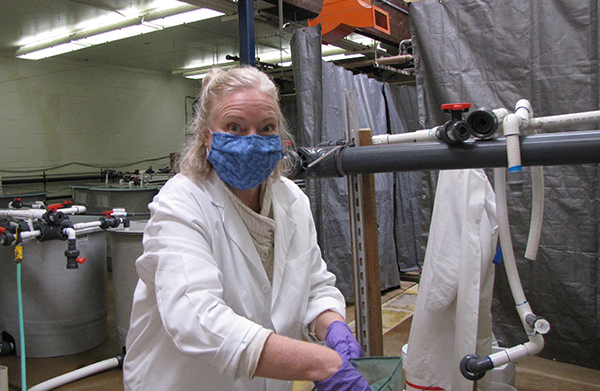 Early life-stage fish were fed mixtures of contaminated food (designed to replicate contamination levels in the field) over a critical growth window of five weeks. Fish were measured, weighed, and individually labeled so researchers can analyze differences in otolith growth to determine contaminant-induced growth effects.

Fifty fish from each of the twenty-eight treatment tanks were captured, humanely euthanized, weighed, measured, bagged and frozen for later chemical analysis, otolith measurements, or archival.  The fish were driven to Seattle on April 22 and archived at the NWFSC Montlake Lab, and the disease-challenge phase of the study began on April 24th.

From the contaminant-exposure phase that finished on April 22nd, the fish remaining in each tank (approximately 130 in each of the 28 tanks) were redistributed into 48 tanks for the disease challenge phase.  The water temperature was raised and half the fish from each feeding treatment were dosed with Aeromonas bacteria.

What happens next?  Many of the fish exposed to the bacteria will die (the bacteria causes a lethal disease).  Deceased fish will be counted and removed as they are observed.  When the mortality event stabilizes (estimated to take 2-3 weeks), the study will end and the surviving fish euthanized.

The results of the study will guide injury assessments and restoration scaling in the Pacific Northwest.

In light of the current national health emergency, safety and social distancing protocols were observed. 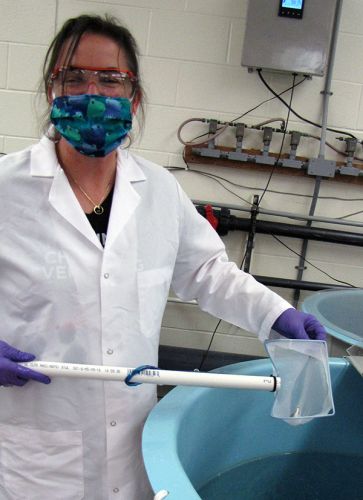