APRIL 27, 2018 — Behind every piece of software is a talented developer responsible for building the tool. NOAA’s environmental modelling software is no different. 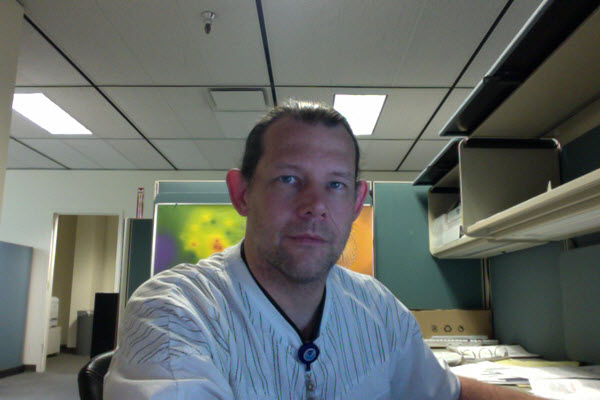 Meet James Makela, an OR&R developer who helps develop WebGnome, a tool that aids NOAA responders and scientists in projecting the environmental effects of an oil spill event.

In his role as a WebGnome developer, James juggles many different activities like programming, writing documentation, analyzing data, and some minor administration of systems. He particularly enjoys taking the scientific papers produced by our esteemed researchers, and then turning them into working examples to be used in real-world applications.

James brings a wealth of experiences to his role at OR&R. He graduated from the DeVry Technical Institute in Phoenix, Arizona with a BSEET, an electrical engineering degree. Although not computer science, it did involve a great deal of programming, mostly at the hardware or assembly level. At the time, James wanted a school that would teach him the essence of modern computing, both the circuitry and software, and DeVry seemed to be the best out of all the collegiate options he had available. All things considered after so many years, he thinks it was a good educational choice!

His electrical engineering major had grounded him in the understanding of physical as well as electrical principles, which he uses nearly every day here at OR&R. But the programming of higher level computer languages is something he has taught himself over the years. He believes his understanding of computing hardware provided a good foundation for this. After a while, he found that he was actually pretty good at it and decided to switch to programming for a living.

In the years after university, he became involved with a number of federal and state projects that help law enforcement carry out their duties. He is proud to have played a small role in them, and during that time, he learned quite a lot from a lot of very smart people. Later, James joined LexisNexis, where he developed the document searching capabilities of one of their major products. This was very educational for him and brought large value to LexisNexis as well. Yet the majority of James’ experiences prior to OR&R were in the field of image identification--fingerprints, to be precise. He spent about 15 years working for a company, Sagem Morpho, developing their fingerprint identification products. Their software is used around the world, primarily in law enforcement, to investigate criminal activity.

In August 2012, his path brought him to OR&R. He applied for a position to help create the next generation of ADIOS, a software tool that models the changes in oil composition after being released into the environment. James was very impressed with the work that had been done at OR&R and empathized with the organization’s goals. We’re glad to have staff with such rich and varied experience that also believe in the goals of NOAA and OR&R.

Over the years James has picked up a number of hobbies outside of his work. He has enjoyed skiing in the winter and read quite a bit of science fiction. He taught himself French and for a number of years was reading French literature. He also plays music--mostly guitar--and has even played in a couple of bands. He still enjoys all of those things, but right now he spends most of his time with music and programming. If you’re ever in the East end of the Seattle office, you might see James around!