AUG. 22, 2022 — On July 26, 2022, OR&R's Disaster Preparedness Program and the Center for Operational Oceanographic Products and Services (CO-OPS) partnered to exercise the Real-Time Currents and Meteorological Buoys (affectionately known as CURBY).

CURBY buoy is deployed into the port of Mobile by CO-OPS and USCG Sector Mobile for the exercise.

As early as 2014, DPP and CO-OPS shared a vision to enhance mission capabilities in the Gulf of Mexico. The idea would influence a partnership across NOAA programs and offices that would result in two identical oceanographic/meteorological buoy systems. The systems were built to be rapidly deployed by a relatively small vessel if a fixed monitoring station was damaged and there was a need for real-time data.

Funding was made available through DPP’s Lagniappe Funds, which provides limited funding to enhance National Ocean Service disaster preparedness. The buoys are a NOAA scientific asset that can be used to support planning and operational decision making during scientific research and emergency response.

The exercise included a series of informative sessions that featured the tools and data available from NOAA CO-OPS, an introduction to the CURBY system, and steps necessary for deployment, including expert guidance for environmental compliance activities. To analyze access, activation, and mobilization of CURBY, the exercise focused on six objectives: 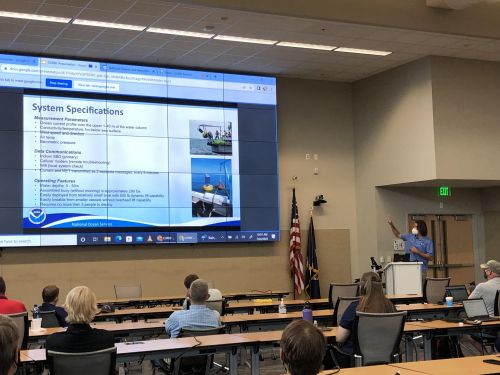 The CURBY exercise included presentations and discussions about the buoy system specifications, data available, terms of use, and applications.

Prior to the exercise, NOAA staff with the assistance of the United States Coast Guard Sector Mobile, deployed the buoy using a Coast Guard vessel. Buoy location was predetermined in partnership with APM terminals, Alabama State Port Authority, the Coast Guard, and NOAA.

This exercise was sponsored by the NOAA Gulf of Mexico Regional Collaboration Team.