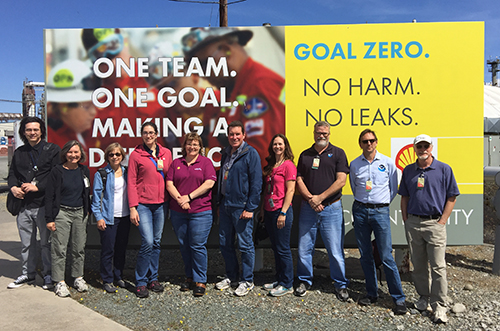 Currently, this plant processes as much as 145,000 barrels (5.7 million gallons) of crude oil per day. When the refinery first began operating, most of its crude oil came from Canada via pipeline. Although it continues to receive crude from Central and Western Canada, now much of the facility's feedstock arrives by tanker from oilfields on Alaska's North Slope. From this crude, the refinery produces three grades of gasoline, fuel oil, diesel fuel, propane, butane, and petroleum coke.

The refinery is located on a peninsula surrounded by sensitive habitats, with the Fidalgo Bay Aquatic Reserve to the west and the Padilla Bay National Estuarine Research Reserve (NERR) to the east and northeast. Vessels transiting to the refinery pass through the San Juan Islands. The area is also part of the usual and accustomed fishing and hunting grounds of both the Swinomish and Lummi Tribal Nations. In addition, there is a second refinery on March Point, owned and operated by Tesoro.

After the morning tour, the group visited the Padilla Bay NERR, a cooperative program of the Washington Department of Ecology and NOAA. In the exhibits of the reserve’s Breazeale Interpretive Center, and firsthand in the mudflats and eelgrass meadow of the NERR, they identified some of the sensitive species and habitats that exist in close proximity to both the Shell and Tesoro refineries. OR&R has also partnered with the Padilla Bay NERR in training and other activities in the recent past.

OR&R thanks Tracy Hascall, Senior Staff Engineer at Shell, for organizing and leading the tour. 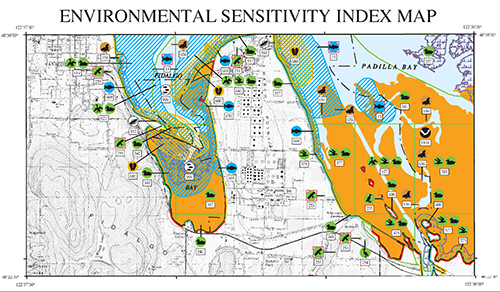 This portion of the Environmental Sensitivity Index map for Fidalgo and Padilla Bays shows colored regions of sensitive habitats, as well as symbols indicating the presence of species vulnerable to an oil discharge into the bays. Image credit: NOAA.
Back to top