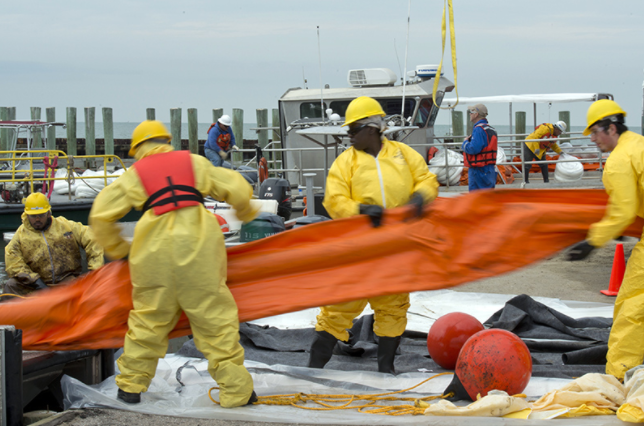 Workers deployed boom around the site of the oil spill in the Houston Ship Channel near the Texas City Dike on March 24, 2014. More than 71,000 feet of boom was deployed in response to the oil spill. Credit: USCG.

The Texas City Y oil spill occurred on March 22, 2014 during a vessel collision between a bulk carrier and a tank barge. The incident spilled an estimated 168,000 gallons of intermediate fuel oil into Galveston Bay and the Gulf of Mexico. More than 160 miles of Texas shoreline were oiled. Scientists identified impacts to a range of natural resources including birds, shorelines, and bottlenose dolphins, as well as recreational activities.

In 2014, this was the first large oil spill response following the Deepwater Horizon oil spill and drew upon many lessons learned from that response. NOAA and our partners responded quickly and provided scientific support to the U.S. Coast Guard.

“We are pleased to join our co-trustees to restore vital habitats, dolphins, birds and recreational areas injured by this oil spill,” said Nicole LeBoeuf, Director of NOAA’s National Ocean Service in a Department of Justice press release. “Local communities and economies depend on resilient coastal ecosystems, and we look forward to working with the public on projects to restore them.”