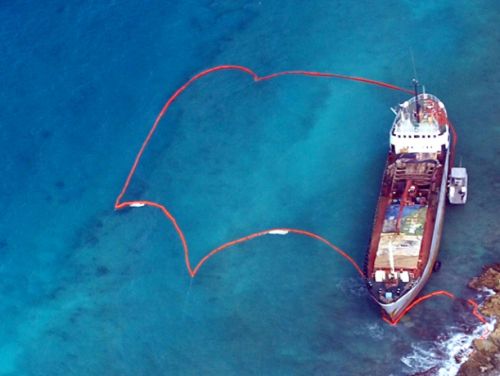 A ship run aground on coral reef in Puerto Rico is surrounded by protective oil boom. Credit: U.S. Fish and Wildlife Service.

Jan. 18, 2017 - Despite an effort to use plain language, government agencies often use jargon that only makes sense to insiders. Here is list of common words that can become head-scratchers when used in the context of spill response.

Boom Not the loud deep resonating sound described in a dictionary. In oil response booms are floating, physical barriers to oil, made of plastic, metal, or other materials, which slow the spread of oil and keep it contained. Read more on the history of booms in spill response here.

Crude A vulgar comment? Nope. in this case the spill response definition fits more into the traditional understanding of the word, something in a raw or unrefined state. Crude oil is unrefined petroleum, usually liquid, consisting of a mixture of hydrocarbons. Crude oil may be refined into any of hundreds of components, such as commercial gasoline, kerosene, heating oils, diesel oils, lubricating oils, waxes, and asphalts. Read more on crude and other oil types here.

Hazing Usually defined as a rigorous initiation process into an organization of some sort, in spill response hazing is about exclusion, “hazing” methods are used to keep whales out of harm’s way. Read more about hazing methods here.

Mousse The first thing that pops into the mind when someone uses the word mousse is that silky pudding-like dessert, or a product to sculpt unruly hair. In spill response, mousse is a term to describe a water-in-oil emulsion that resembles chocolate mousse in color and texture. These emulsions are often very stable, and often have a pudding-like consistency. Typically, a mousse forms when relatively fresh oil is exposed to strong wave action. Mousse colors can range from orange or tan to dark brown. A mousse may contain up to 75 percent water, and may have a volume up to four times that of the original oil. Learn how to make an oil and water mousse here.

Pancakes Nope, not the breakfast food. In this case pancakes refer to isolated, roughly circular patches of spilled oil ranging in size from a few feet across to hundreds of yards (or meters) in diameter. These oil patches can form tarballs sometimes found along sandy beaches. Read more on tarballs here.

Pom-poms Similar to the equipment used by many a cheer-squad member, pom-poms in spill response are used to absorb oil for removal. Made of synthetic fibers, pom-poms are used individually or tied on long ropes and used to catch oil as it leaches from beaches and rocky areas. Strings of pom-poms are effective in collecting oil in rock or difficult to reach areas where the tide rises and falls. Read about how pom-poms were used to cleanup an oil spill here.

SOS Save our ship? How about Science of Oil Spills. Every year the Emergency Response Division educates emergency spill responders increasing their understanding of oil spill science. Read about SOS classes here.

Slick Typically defined as something done in a smooth way, a slick is the common term used to describe a film of oil (usually less than 2 microns thick) on the water surface. Oil spilled on water absorbs energy and dampens out surface waves, making the oil appear smoother—or slicker—than the surrounding water. Read about oil slicks and sea turtles here.

Streamer Those paper ribbons hanging from the ceiling at a party, right? Wrong. In spill response a streamer, also called fingers or ribbons, are narrow lines of oil, mousse, or sheen on the water surface, surrounded on both sides by clean water. Streamers result from the combined effects of wind, currents, and/or natural convergence zones. Often, heavier concentrations of mousse or sheen will be present in the center of a streamer, with progressively lighter sheen along the edges. Read about techniques for cleaning up streamers in oil spills here.

Weathering OK, in this instance, the meaning used in spill response is similar to the general definition. In oil response weathering is the physical and chemical characteristics of oil interacting with the physical and biochemical features of the habitat where a spill occurs. These factors determine how the oil will behave and ultimately what will happen to it. Read more about weathering here.