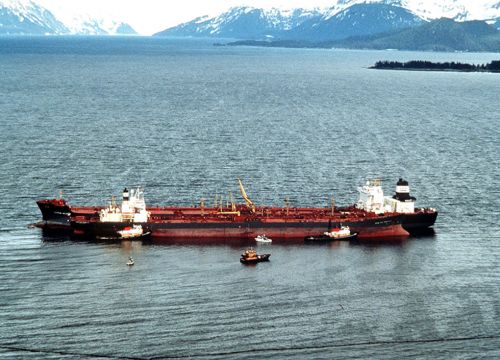 MARCH 24, 2016 -- While oil spills happen almost every day, we are fortunate that relatively few make such large or lasting impressions as the Deepwater Horizon or Exxon Valdez spills.

Before 2010, when the United States was fixated on a gushing oil well at the bottom of the Gulf of Mexico, most Americans could probably only name one spill: when the tanker Exxon Valdez released 11 million gallons of crude oil into Alaska's Prince William Sound on March 24, 1989.

Here we've gathered 10 photos that help tell the story of the Exxon Valdez oil spill and its impacts, not only on the environment but also on science, policy, spill response, school kids, and even board games. It has become a touchstone event in many ways, one to be learned from even decades after the fact. In an ironic twist of fate, the Exxon Shipping Company's safety calendar featured the tanker Exxon Valdez in March 1989, the same month the ship ran aground. Image: From the collection of Gary Shigenaka.

Long before the Exxon Valdez tanker ran aground on Bligh Reef in Prince William Sound, a series of events were building that would enable this catastrophic marine accident to unfold as it did. These actions varied from the opening of the Trans-Alaska Pipeline in the 1970s to the decision by the corporation running that pipeline to disband its oil spill response team and Exxon’s efforts to hold up both the tanker Exxon Valdez and its captain, Joseph Hazelwood, as exemplars of safety.

Captain Hazelwood received two Exxon Fleet safety awards for 1987 and 1988, the years leading up to March 1989, which was coincidentally the month the Exxon Valdez was featured on an Exxon Shipping Company calendar bearing the warning to "take time to be careful - now."

Read more about the timeline of events leading up to the Exxon Valdez oil spill. Thanks to the Oil Pollution Act, federal and state agencies can more easily evaluate the full environmental impacts of oil spills -- and then enact restoration to make up for that harm. (Exxon Valdez Oil Spill Trustee Council)

Photos of oil-soaked birds and other wildlife in Prince William Sound reinforced just how inadequate the patchwork of existing federal, state, and local laws were at preventing or addressing the Exxon Valdez oil spill.

While lawmakers took nearly a year and a half—and a few more oil spills—to pass the Oil Pollution Act of 1990, this landmark legislation was without a doubt inspired by that major oil spill. (After all, the law specifically "bars from Prince William Sound any tank vessels that have spilled over 1,000,000 gallons of oil into the marine environment after March 22, 1989." In other words, the Exxon Valdez.) In the years since it passed, this law has made huge strides in improving oil spill prevention, cleanup, liability, and restoration.

3. The end of single-hull tankers Evidence of the success of double-hull tankers: The Norwegian tanker SKS Satilla collided with a submerged oil rig in the Gulf of Mexico in 2009 and despite this damage, did not spill any oil. (Texas General Land Office)

This image of a damaged ship is not showing the T/V Exxon Valdez, and that is precisely the point. The Exxon Valdez was an oil tanker with a single hull, which meant that when it hit ground, there was only one layer of metal for the rocks to tear through and release its tanks of oil.

But this 2009 photo shows the Norwegian tanker SKS Satilla after it sustained a major gash in its double-sided hull—and didn't spill a drop of oil. Thanks to the Oil Pollution Act of 1990, all new tankers and tank-barges were required to be built with double hulls to reduce the chance of another Exxon Valdez situation. January 1, 2015 was the final deadline for phasing out single-hull tankers in U.S. waters.

Letter from Kelli Middlestead from the Franklin School, Burlingame, California to Walter Stieglitz the Regional Director of the Alaska Region of the U.S. Fish and Wildlife Service, 04/13/1989. (U.S. National Archives)

Policymakers weren't the only ones to take note and take action in the wake of the Exxon Valdez oil spill. Second grader Kelli Middlestead of the Franklin School in Burlingame, California, was quite upset that the oil spill was having such devastating effects on one of her favorite animals: sea otters. So, on April 13, 1989, she wrote and illustrated a letter to Walter Stieglitz, Alaskan Regional Director of the U.S. Fish and Wildlife Service, to let him know she felt that the oil spill was "killing nature."

Indeed, sea otters in Prince William Sound weren’t declared recovered from the Exxon Valdez oil spill until 2013. Other species still haven’t recovered and in some sheltered beaches below the surface, you can still find pockets of oil. One of the species that has yet to recover after the Exxon Valdez oil spill is the killer whale, or orca. Before this oil spill, scientists and oil spill experts thought that these marine mammals were able to detect and avoid oil spills. That is, until two killer whale pods were spotted swimming near or through oil from this spill. One of them, a group nicknamed the "AT1 Transients" which feed primarily on marine mammals, suffered an abrupt 40% drop in population during the 18 months following the oil spill.

The second group of affected killer whales, the fish-eating "AB Pod Residents," lost 33% of their population, and while they have started to rebound, the transients are listed as a "depleted stock" under the Marine Mammal Protection Act and may have as few as seven individuals remaining, down from a stable population of at least 22 in the 1980s.

Building on the lessons of the Exxon Valdez and Deepwater Horizon oil spills, NOAA has developed an emergency plan for keeping the endangered Southern Resident killer whale populations of Washington and British Columbia away from potential oil spills. A normal yellowfin tuna larva (top), and a larva exposed to Deepwater Horizon crude oil as it was developing (bottom). The oil-exposed larva shows a suite of abnormalities including excess fluid building up around the heart due to heart failure and poor growth of fins and eyes. (NOAA)

How does crude oil affect fish populations? In the decades since the Exxon Valdez spill, teams of scientists have been studying the long-term effects of oil on fish such as herring, pink salmon, and tuna. In the first couple years after this spill, they found that oil was in fact toxic to developing fish, curving their spines, reducing the size of their eyes and jaws, and building up fluid around their hearts.

As part of this rich research tradition begun after the Exxon Valdez spill, NOAA scientists helped uncover the precise mechanisms for how this happens after the Deepwater Horizon oil spill in 2010. The photo here shows both a normal yellowfin tuna larva not long after hatching (top) and a larva exposed to Deepwater Horizon crude oil as it developed in the egg (bottom).

The oil-exposed larva exhibits a suite of abnormalities, showing how toxic chemicals in oil such as polycyclic aromatic hydrocarbons (PAHs) can affect the embryonic heart. By altering the embryonic heartbeat, exposure to oil can transform the shape of the heart, with implications for how well the fish can swim and survive as an adult.

7. Caught between a rock and a hard place Not all impacts from an oil spill are as easy to see as deformed fish hearts. As NOAA scientists Alan Mearns and Gary Shigenaka have learned since 1989, picking out those impacts from the noisy background levels of variability in the natural environment become even harder when the global climate and ocean are undergoing unprecedented change as well.

Mearns, for example, has been monitoring the boom and bust cycles of marine life on a large boulder—nicknamed "Mearns Rock"—that was oiled but not cleaned after the Exxon Valdez oil spill. What he and Shigenaka have observed on that rock and elsewhere in Prince William Sound has revealed large natural swings in the numbers of mussels, seaweeds, and barnacles, changes which are unrelated to the oil spill as they were occurring even in areas untouched by the spill.

Read more about how these scientists are exploring these challenges and a report on NOAA’s involvement in the wake of this spill. 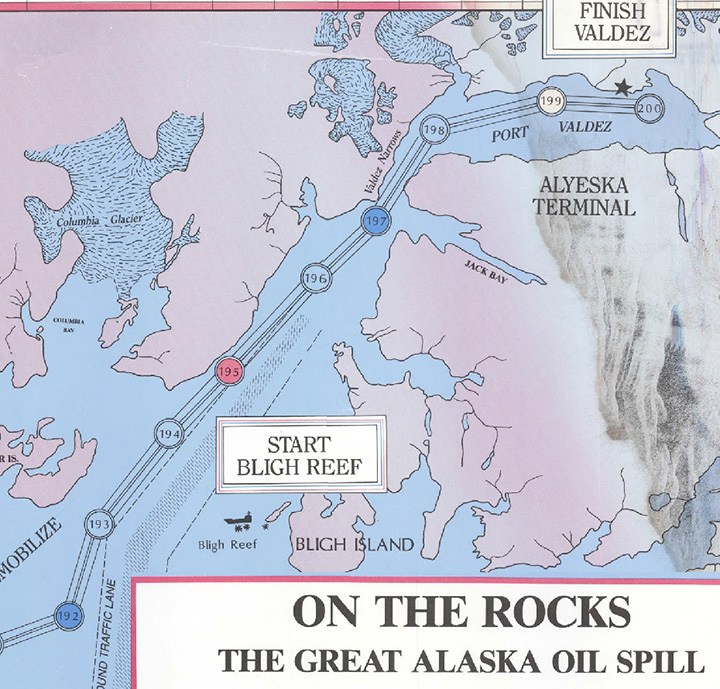 The game On the Rocks: The Great Alaska Oil Spill challenges players to clean all 200 miles of shoreline oiled by the Exxon Valdez -- and do so with limits on time and money. (Credit: Alaska Resources Library and Information Services, ARLIS)

Just as the Exxon Valdez oil spill touched approximately 200 miles of remote and rugged Alaskan shoreline, this spill also touched the hearts and minds of people far from the spill. References to it permeated mainstream American culture in surprising ways, inspiring a cookbook, a movie, a play, music, books, poetry, and even a board game.

That's right, a bartender from Valdez, Alaska, produced the board game "On the Rocks: The Great Alaska Oil Spill" as a result of his experience employed in spill cleanup. Players vied to be the first to wash all 200 miles of oiled shoreline without running out of time or money.

9. Carrying a piece of the ship The rusted and nondescript piece of steel on the left was a piece of the tanker Exxon Valdez, recovered by the salvage crew in 1989 and given to NOAA marine biologist Gary Shigenaka. It was the beginning of his collection of Exxon Valdez artifacts and remains the item with the biggest personal value to him. The piece of metal on the right, inscribed with "On the rocks," is also metal from the ship but was purchased on eBay. (NOAA)

One NOAA scientist in particular, Gary Shigenaka, who kicked off his career working on the Exxon Valdez oil spill, was personally touched by this spill as well. After receiving a small chunk of metal from the ship's salvage, Shigenaka began amassing a collection of Exxon Valdez–related memorabilia, ranging from a highball glass commemorating the ship's launch in 1986 (ironic considering the questions surrounding its captain being intoxicated the night of the accident) to the front page of the local paper the day of the spill. After causing the largest-to-date oil spill in U.S. waters, what ever happened to the ill-fated Exxon Valdez ship? It limped back for repairs to San Diego Bay where it was built, but by the time it was sea-ready again, the ship had been banned from Prince William Sound by the Oil Pollution Act and would instead be reassigned to the Mediterranean and Middle East and renamed accordingly, the Exxon Mediterranean.

But a series of new names and bad luck continued to follow this ship, until it was finally sold for scrap in 2011. Under its final name, Oriental Nicety, it was intentionally grounded at the infamous shipbreaking beaches of Alang, Gujarat, India, in 2012 and dismantled in its final resting place 23 years after the Exxon Valdez ran aground half a world away.