10 Years after Being Hit by Hurricane Katrina, Seeing an Oiled Marsh at the Center of an Experiment in Oil Cleanup

AUGUST 25, 2015 -- On August 29, 2005, not far from Chevron Pipe Line Company's oil terminal in Buras, Louisiana, Hurricane Katrina made landfall. Knowing the storm was approaching, residents left the area, and Chevron shut down the crude oil terminal, evacuating all personnel. The massive storm's 144 mile per hour winds, 18 foot storm tide, and waves likely twice the height of the surge put the terminal under water. At some point during the storm, one of the terminal's storage tanks was severely damaged on top, possibly after being hit by something extremely large carried by the storm waters. The tank released crude oil into an adjacent retention pond designed to catch leaking oil, which it did successfully. However, just a few short weeks later, Hurricane Rita hit the same part of the Gulf and the same oil terminal. Much of the spilled oil was still being contained on the retention pond’s surface, and this second hurricane washed the oil into a nearby marsh.

Built in 1963, Chevron's facility in Buras is one of the largest crude oil distribution centers in the world and is located on a natural levee on the east bank of the Mississippi River. These back-to-back hurricanes destroyed infrastructure at the terminal as well as in the communities surrounding it. Helicopter was the only way to access the area in the weeks that followed. Chevron wildlife biologist and environmental engineer Jim Myers witnessed the storms' aftermath at the terminal. He described trees stripped of leaves, and mud and debris strewn everywhere, including power lines. Dead livestock were found lying on the terminal's dock. And black oil was trapped in the marsh’s thick mesh of sedge and grass. This particular marsh is part of a large and valuable ecosystem where saltwater from the Gulf of Mexico and freshwater from the Mississippi River come together. Even after using boom and skimmers to remove some oil, an estimated 4,000 gallons of oil remained in the 50 acre marsh on the back side of the terminal. Delicate and unstable, marshes are notoriously difficult places to deal with oil. The chaos of two hurricanes only complicated the situation. 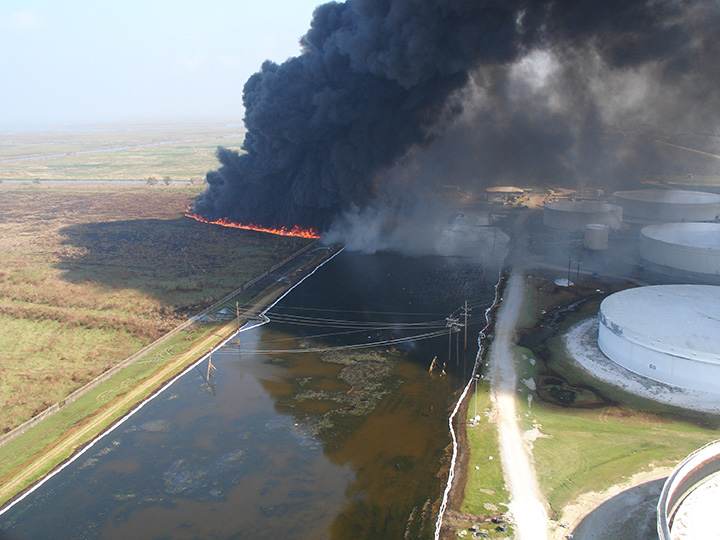 Lit with propane torches, the fire on the first day, October 12, 2005, was dramatic, generating dense black smoke and burning for three hours. The thick smoke was the result of burning the part of the marsh closest to the Chevron terminal, where the oil was thickest. (NOAA)

Once the terminal's substantial cleanup and repair activities began, an environmental team was assembled to consider options for dealing with the oiled marsh. Dr. Amy Merten and others from NOAA’s Office of Response and Restoration, Jim Myers and others from Chevron, and personnel from the U.S. Coast Guard, Louisiana Department of Wildlife and Fisheries, and U.S. Fish and Wildlife Service rounded out this team. The team considered several options for treating the marsh, but one leapt to the top of the list: burning off the oil, a procedure known as in situ burn. In situ burning was the best option for several reasons: the density and amount of remaining oil, remote location, weather conditions, absence of normal wildlife populations after the storms, and the fact that the marsh was bound on three sides by canals, creating barriers for the fire. Also, for hundreds of years, the area had seen both natural burns (due to lightning strikes) and prescribed burns, with good results. Yet this recommendation met some initial resistance. In situ burning was a more familiar practice for removing oil from the open ocean than from marshes, though its use in marshes had been well-reviewed in scientific studies. Still, in the midst of a hectic and widespread response following two hurricanes, burning oil out of marshes seemed like a potentially risky move at the time. Furthermore, some responders working elsewhere followed conventional wisdom that the oil had been exposed to weathering processes for too long to burn successfully. However, the oil was so thick on the water's surface and so protected from the elements by vegetation that the month-old oil behaved like freshly spilled oil, meaning it still contained enough of the right compounds to burn. The environmental team tested the oil to demonstrate it would burn before bringing the idea to those in charge of the post-hurricane pollution cleanup, the Unified Command.

Fortunately, the leader of the Unified Command approved the carefully crafted plan to burn the oiled marsh. The burns took place on October 12 and 13, 2005, a month and a half after the spill. After dividing and cutting the affected marsh into a grid of six plots, responders burned two areas each day, leaving two plots unburned since they were negligibly oiled and did not have the right conditions to burn. Lit with propane torches, the fire on the first day was dramatic, generating dense black smoke and burning for three hours, the result of burning the part of the marsh closest to the terminal, where the oil was thickest. The second fire generated less smoke but burned longer, for about four and half hours. Afterward, you could see how the burn’s footprint matched where different levels of oil had been. Observations after the fact assured the environmental team that most (more than 90 percent) of the oil had been burned in the four treated areas. Small pockets of unburned oil were collected with sorbent pads, and any residual oil was left to degrade naturally. Within 24 hours of burning, traces of regrowth were visible in the marsh, and in less than a month, sedge grasses had grown to a height of one to two feet, according to Myers. 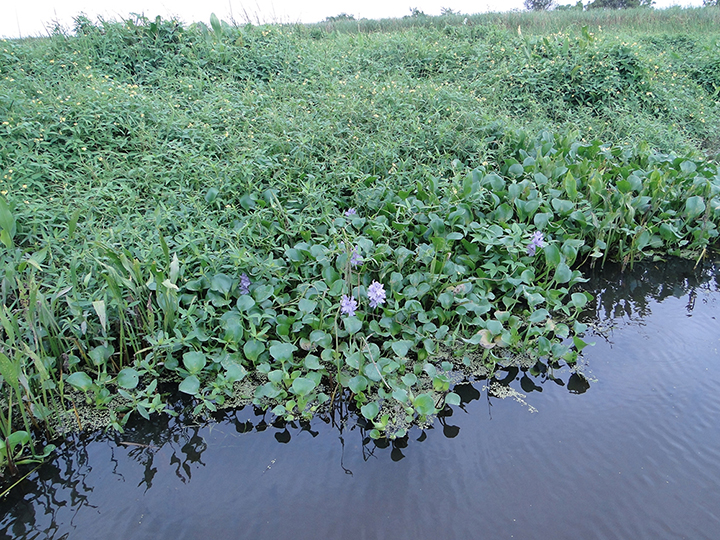 The marsh that was oiled after Hurricanes Katrina and Rita in 2005, and subsequently burned to remove the oil. This is how it looked in August of 2015, showing an abundance of diverse vegetation. (NOAA)

Ten years later, in August of 2015, NOAA's Vicki Loe was curious to see how the marsh had come back. She had seen many photos of during and after the burn, and subsequent reports were that the endeavor had been a great success. Knowing she would be in the New Orleans area on vacation, Loe was pleased to learn that Jim Myers would be willing to give her a tour of this marsh. She met him at the ferry dock to cross to the east side of the Mississippi River and the Chevron terminal. They looked out over the marsh from an elevated platform behind the giant oil storage tanks. All they could see were lush grasses, clumps of low trees, and birds, birds, birds. Their calls were nonstop. They saw cattails uprooted next to flattened paths leading to the water's edge, evidence of alligators creating trails from the water to areas for basking in the sun and of cows, muskrats, and feral hogs feeding on the cattails' roots. The water level was high, so rather than hike through the marsh, Loe and Myers traveled the circumference in a flat-bottomed boat. They saw many species of birds, as well as dragonflies, freely roaming cows, fish, and an alligator. Today, the marsh is flourishing. Loe could see no difference between the areas that were oiled and burned 10 years ago and nearby areas that were untouched. In fact, monitoring following the burn [PDF] found that the marsh showed recovery across a number of measures within nine months. This marsh represents one small part of a system of wetlands that has historically provided a buffer against the high waters of past storms. Since the 1840s, when it was settled, Buras, Louisiana, has survived being hit by at least five major hurricanes. But Hurricane Katrina was different. Gradually, marshes across the northern Gulf of Mexico have been disappearing, enabling Hurricane Katrina's floodwaters to overwhelm areas that have weathered previous storms. Ensuring existing marshes remain healthy will be one part of a good defense strategy against the next big hurricane. Given the successful recovery of this marsh after both an oil spill and in situ burn, we know that this technique will help prevent the further degradation of marshes in the Gulf. See more photos of the damaged tank, the controlled burn to remove the oil, and the recovered marsh 10 years later. Find more information about the involvement of NOAA's Office of Response and Restoration after Hurricanes Katrina and Rita. 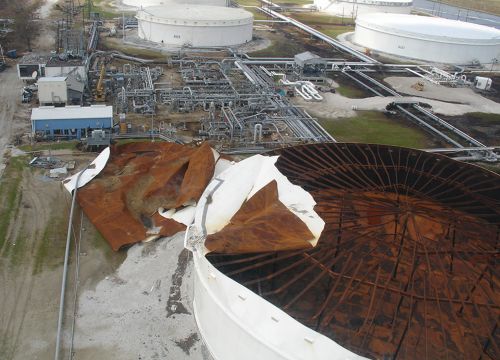 During Hurricane Katrina in 2005, one of the Chevron oil terminal’s storage tanks was severely damaged on top, possibly after being hit by something extremely large carried by the storm waters. 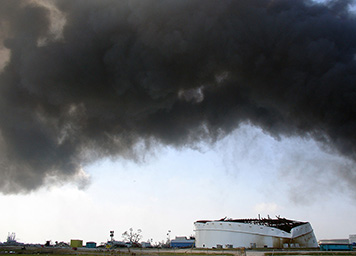 The thick, black smoke from the burning marsh as it blew back over the oil tank, which had spilled oil into the nearby marsh after being damaged by the hurricanes of 2005. (NOAA)
Back to top