100 Years After the Titanic and the Dangers of Sea Ice

APRIL 13, 2012 -- One of the greatest marine accidents of the 20th century involved an ocean liner hitting an iceberg. The 100th anniversary of the Titanic sinking is April 15.

Can you imagine what it must have been like for the crew trying and failing to turn the massive, 883 foot-long ship just before hitting the iceberg?

It can take sometimes as many as 5 miles to turn and stop a large vessel. But did you know that another great maritime accident of the 20th century came from a ship changing course to avoid ice?

Just before midnight, Captain Joe Hazelwood called the Coast Guard Vessel Traffic Center on the radio and said he was changing course and diverting from the designated traffic lanes. But the Exxon Valdez wasn't just taking a short cut across the Sound. The Captain intentionally turned the ship to "wind my way through the ice."

The Columbia Glacier is about 30 miles from the port town of Valdez, Alaska, and some of the ice that breaks off the glacier floats out into the shipping lanes.

Because of the hazard ice poses to shipping, NOAA's Office of Response and Restoration prepared a booklet guide to sea ice [PDF] to make it easier for captains and pilots to report and share information about ice conditions at sea.

Sea ice comes in a lot of forms and sizes and has some colorful names like "brash," "growler," "cake," and "bergy bits." The one that the Titanic hit likely would be classified as a "large berg," which can range in size from 401 to 670 feet.

You can find out more information about the Titanic and NOAA's role in discovering, studying, and protecting the site of this historic shipwreck, now a tragic symbol of the dangers of ice at sea. 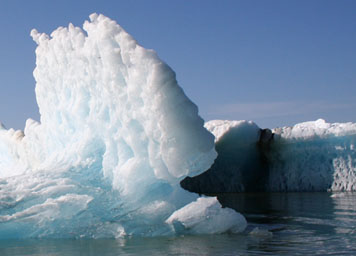 Sea ice consists of frozen sea water and is observed in terms of three basic parameters: concentration, stage of development, and form. (NOAA)
Back to top