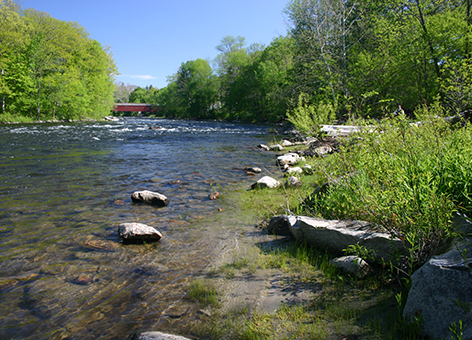 The latest round of aquatic restoration projects for the Housatonic River will also indirectly improve water quality, increase buffering during coastal storms, and reduce runoff pollution into the river. (NOAA)

FEBR. 22, 2013 — NOAA, the U.S. Fish and Wildlife Service, and the State of Connecticut released a proposal to use approximately $2 million from a 1999 settlement with General Electric Company (GE) to fund projects to increase fish habitat and restore marshes on the Housatonic River. Between 1932 and 1977, GE discharged polychlorinated biphenyls (PCBs) and other chemical wastes from its facility in Pittsfield, Mass, into the Housatonic River, which runs through western Massachusetts and Connecticut. As a result, the Housatonic's fish, wildlife, and their habitats suffered from the effects of these highly toxic compounds.

Part of an amendment to the 2009 restoration plan [PDF] for the Housatonic site, these latest projects highlight aquatic restoration because the original plan primarily focused on recreational and riparian restoration, with more than half of those projects already complete. The amendment identifies seven preferred restoration projects and three non-preferred alternatives to increase restoration of injured aquatic natural resources and services. These projects aim to more fully compensate the public for the full suite of environmental injuries resulting from GE’s decades of PCB contamination by:

The 1999 legal settlement with GE included $7.75 million for projects in Connecticut aimed at restoring, rehabilitating, or acquiring the equivalent of the natural resources and recreational uses of the Housatonic River injured by GE's Pittsfield facility pollution. Settlement funds grew to more than $9 million in an interest-bearing fund. NOAA and its co-trustees are using the majority of the remaining $2,423,328 of those funds to implement these additional aquatic natural resources projects.

Public comments and additional project proposals for this draft amendment to the restoration plan will be accepted through March 11, 2013. Comments should be sent to Robin Adamcewicz, Department of Energy and Environmental Protection, Eastern District Headquarters, 209 Hebron Road, Marlborough, CT 06447, or emailed to robin.adamcewicz@ct.gov Learn more about Restoring Natural Resources in Connecticut's Housatonic River Watershed [PDF].