$3.7 Million to go toward Restoring Contaminated Natural Resources in Alabama

Update: Jan. 13, 2017 –Restoration plans for the Tombigbee River and its adjacent floodplain are now open for public comment. Details on the a Draft Damage Assessment and Restoration Plan/Programmatic Environmental Assessment for the Ciba Geigy – McIntosh Plant (Ciba) may be found here. 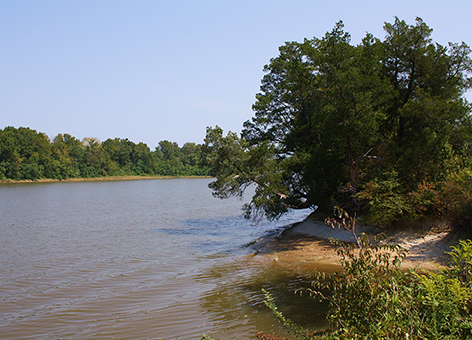 Beginning in the 1950s, hazardous wastes from producing the pesticide DDT were released into unlined pits at the McIntosh, Ala., plant and discharged into the Tombigbee River and its adjacent floodplain. (Credit: Jeffrey Reed, Creative Commons Attribution-Share Alike 3.0 Unported license)

OCTOBER 18, 2013 -- Four federal and state trustee agencies have announced $3.7 million in funds following a natural resource damages settlement to restore natural resources and habitats harmed by hazardous substances released from a manufacturing site in McIntosh, Ala. The funds are part of a $5 million settlement with BASF Corporation, the company that acquired the Ciba-Geigy Corporation's McIntosh facility. Beginning in the 1950s, the facility manufactured DDT, a pesticide used to combat disease-carrying insects, as well as other pesticides, herbicides, and various agricultural and industrial chemicals. During those years, hazardous wastes from the facility were released into unlined pits on the property and discharged into the Tombigbee River and its adjacent floodplain. The settlement was negotiated by the U.S. Department of Justice's Environment and Natural Resources Division on behalf of the trustees. The natural resource trustees—NOAA, Department of Interior's U.S. Fish and Wildlife Service, Alabama Department of Conservation and Natural Resources, and Geological Survey of Alabama—began a cooperative natural resource damage assessment with the responsible party in 2005 to identify resource injuries and the amount of restoration needed. The trustees act on behalf of the public to protect and restore natural resources. Nearly $3.2 million of the $5 million BASF settlement will be used to plan, implement, and oversee restoration projects and/or acquire lands within the Mobile Bay watershed to compensate for resources injured as a result of exposure to contaminants from the facility. The state of Alabama will receive $500,000 to fund additional ecosystem restoration efforts through support of the Alabama Aquatic Biodiversity Center. The remaining funds will reimburse the Fish and Wildlife Service and NOAA for their past assessment costs. The use of DDT was banned in the United States in 1972 because of its harmful effects on the environment, wildlife and the public. Once released, DDT persists in the environment for a long time and increases in concentrations up the food chain. In 1984, EPA listed the McIntosh facility as a Superfund site. Early investigations on this site found elevated concentration levels of DDT in fish and sediments within the floodplain, bottomland hardwood forests, and areas of the Tombigbee River adjacent to the site. The settlement agreement is available on NOAA's Damage Assessment, Remediation, and Restoration Program website at www.darrp.noaa.gov/southeast/ciba/index.html. The trustees will develop a draft restoration plan with proposed projects, which will be released for public review and comment. Photos: Top photo: Jeffrey Reed, Creative Commons Attribution-Share Alike 3.0 Unported license. Bottom photo: Used with permission from Alabama Media Group. 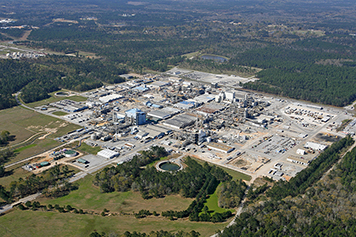 A view of the former Ciba chemical plant, now owned by BASF, which has agreed to pay $3.7 million for restoration projects for historical pollution coming from this McIntosh, Ala. facility. (Credit: Alabama Media Group/All Rights Reserved)
Back to top