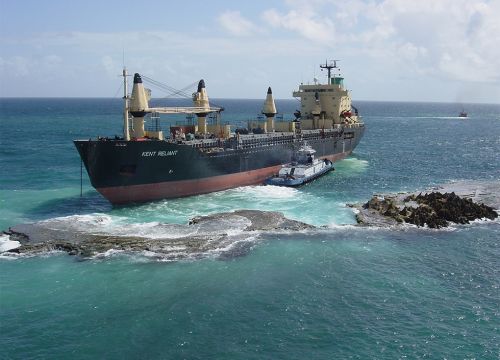 On September 18, 2003, M/V Kent Reliant grounded at the entrance to San Juan Harbor, Puerto Rico. USCG and NOAA’s Office of Response and Restoration responded to the incident. (NOAA)

March 1, 2017 -- How do the Coast Guard and National Oceanic and Atmospheric Administration work together? There are many ways the two government organizations partner to keep the nation’s coasts and waterways safe for maritime commerce, recreational activities, and wildlife. Here are five:

1. It all began with surveyors and smugglers

Actually, it was an effort to suppress smuggling and collect tariffs that prompted President George Washington to create the Coast Guard Revenue Cutter Service in 1790, launching what would become the U.S. Coast Guard known today. It was President Jefferson’s approval of the surveying of the nation’s coasts in 1807 to promote “lives of our seamen, the interest of our merchants and the benefits to revenue,” that created the nation’s first science agency, which evolved into NOAA.

2. Coast Guard responds to spills; we supply the scientific support

The Coast Guard has the primary responsibility for managing oil and chemical spill clean-up activities. NOAA Office of Response and Restoration provides the science-based expertise and support needed to make informed decisions during emergency responses. Scientific Support Coordinators provide response information for each incident that spill’s characteristics, working closely with the Coast Guard’s federal On-Scene Coordinator. The scientific coordinator can offer models that forecast the movement and behavior of spilled oil, evaluation of the risk for resources, and suggest appropriate clean-up actions.

The Coast Guard sits on the Interagency Marine Debris Coordinating Committee, of which NOAA is the chair. The committee is a multi-agency body responsible for streamlining the federal government’s efforts to address marine debris. In some circumstances, the Coast Guard helps to locate reported marine debris or address larger items that are hazardous to navigation. For instance, in certain circumstances, the Coast Guard may destroy or sink a hazard to navigation at sea, as was the case with a Japanese vessel in the Gulf of Alaska in March 2011.

4. NOAA and Coast Guard train for oil spills in the Arctic

As Arctic ice contracts, shipping within and across the Arctic, oil and gas exploration, and tourism likely will increase, as will fishing, if fisheries continue migrating north to cooler waters. With more oil-powered activity in the Arctic and potentially out-of-date nautical charts, the region has an increased risk of oil spills. Although the Arctic may have "ice-free" summers, it will remain a difficult place to respond to spills, still facing conditions such as low visibility, mobilized icebergs, and extreme cold. The Office of Response and Restoration typically participates in oil spill response exercises with the Coast Guard.

5. It’s not just spills we partner on, sometimes it’s about birds

The Coast Guard as well as state and local agencies and organizations have been working to address potential pollution threats from a number of abandoned and derelict boats in the Florida. Vessels like these often still have oils and other hazardous materials on board, which can leak into the surrounding waters, posing a threat to public and environmental health and safety. In 2016, the Coast Guard called Scientific Support Coordinator Adam Davis with an unusual complication in their efforts: A pair of osprey had taken up residence on one of these abandoned vessels. The Coast Guard needed to know what kind of impacts might result from assessing the vessel's pollution potential and what might be involved in potentially moving the osprey nest, or the vessel, if needed. Davis was able to assist in keeping the project moving forward and the vessel was eventually removed from the Florida Panhandle.