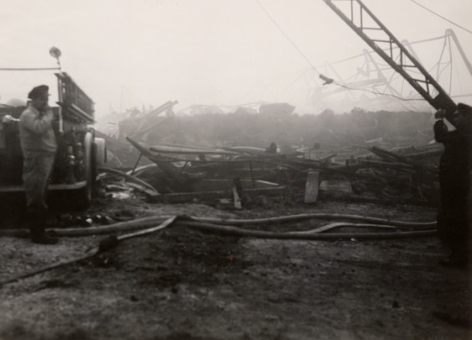 This barge, originally located near the Grandcamp's explosion, was lifted out of the water and landed 100 feet inland. The firetruck at left (behind the man) was thrown there by the second explosion. Photo taken April 18, 1947. (Courtesy of Special Collections, University of Houston Libraries. UH Digital Library)

APRIL 16, 2012 — On a cool April morning in 1947, the S.S. Grandcamp sat docked in Texas City, waiting as it was loaded with sacks of ammonium nitrate fertilizer. A few years earlier, this humble cargo ship had been part of the U.S. Navy's Pacific Fleet.

After World War II, the U.S. government gave it to France as a gift to help rebuild a shattered Europe, where it was renamed the Grandcamp and converted into a slightly less grand cargo ship, which now found itself waiting fatefully in a Texas port.

The Grandcamp's freight that day, ammonium nitrate fertilizer, is usually a relatively safe cargo, but it can quickly become unstable and explosive under certain conditions, which is also why it is used as an industrial and military explosive.

Arriving by train in Texas City, this cargo may have become too warm to ship safely, but at the time, few chemical safety regulations existed, and the fertilizer was packed onto the Grandcamp along with its previous shipments of twine, peanuts, tobacco, and 16 cases of small arms ammunition.

Around 8:00 a.m. on April 16, after about 2,300 tons of fertilizer were loaded, workers noticed smoke and vapors coming from the ship.  No one knew what caused the fire in the hold. The captain ordered the hatches battened and tarpaulins thrown over them, calling for steam to be piped into the ship—a firefighting technique he hoped would put out the fire but preserve the cargo. However, this would only make things worse. 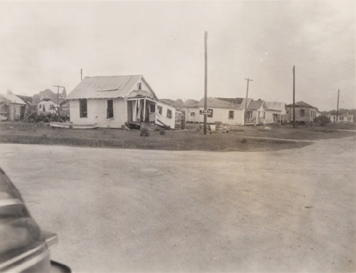 Shortly after 9:00 a.m., the ship exploded with tremendous force. The resulting explosion launched the cargo 2,000 to 3,000 feet into the sky, caused a 15-foot tidal wave, and was felt as far as 250 miles away.

A nearby ship, the S.S. High Flyer, also loaded with ammonium nitrate, ignited and about 16 hours later, also exploded.

The combined explosions resulted in the largest industrial disaster of its time in the U.S., taking the lives of an estimated 500–600 people. Thousands more were injured.

On a warm November evening in 2003, Barge NMS 1477 sat docked in Texas City, just across from the same dock where the Grandcamp had been waiting fatefully 56 years earlier. Loaded with 197,000 gallons of concentrated sulfuric acid (>97%), the barge capsized during the final stages of loading on November 3. With the barge now floating upside down at the dock, acid began slowly leaking from the vents as seawater rushed in, dangerously diluting the acid.

Charlie Henry, then NOAA's Scientific Support Coordinator for the region, quickly reported to the scene to support the United States Coast Guard Captain of the Port. While the situation appeared stable, the threat of a possible disaster was slowly growing. Inside the bowels of the barge, an aggressive chemical reaction was taking place. 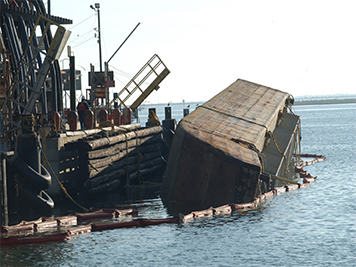 Barge NMS 1477 later tilted on its side, where it was coincidentally located at the same Texas City dock as the S.S. High Flyer. (NOAA)

Highly concentrated acid is actually stable when shipping, but partially diluted concentrated sulfuric acid is highly corrosive. As the acid began mixing with small amounts of seawater, it began eating away at the barge's steel structure, releasing heat and explosive hydrogen gas.

The gravity of this situation was not lost on Charlie and others involved in the response. This was quickly becoming a very dangerous situation for the responders and the local public.

With the gruesome 1947 catastrophe on their minds, the local NOAA responders along with a Louisiana State University chemist providing scientific support arrived at the site of the partially sunken barge on November 5, and the Seattle-based NOAA response team also went into high gear.

The response team included the U.S. Coast Guard, the Texas Commission of Environmental Quality, Texas Parks and Wildlife, the U.S. Environmental Protection Agency, and NOAA, as well as representatives from the barge's operator, Martin Product Sales LLC, all working together to minimize the impact of this incident. 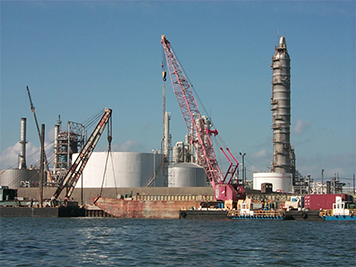 The dock where the barge overturned in the Port of Texas City in 2003. (NOAA)

The barge had now tilted on its side and rested on the bottom at the dock. This was the same spot that the unfortunate S.S. High Flyer was docked in 1947. Everyone's immediate concern was the potential for an explosion from the hydrogen gas now built up in the barge. The gas had expanded the barge's side-plates and vigorously bubbled from vents located underwater near where the side of the barge rested on the bottom.

Since 1947, this area in Texas City had been extensively developed to support the chemical and oil industries, meaning that an explosion on the barge could lead to even more damage and disaster than before.

Because the threat of explosion was so great, the responders made the unusual but necessary decision to do a controlled spill of the vessel's remaining sulfuric acid into the adjacent harbor waters. To dilute such large volumes of acid to a concentration considered below an environmental hazard, it would have to be mixed with huge volumes of water. The buffering salts in seawater would also help mitigate the acid. The operation was complete by November 13, nine days after the accident. 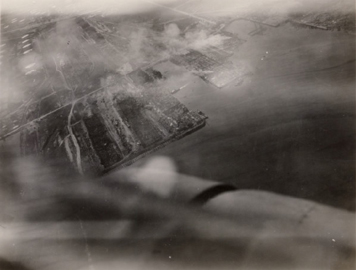 The decision to intentionally spill the cargo wasn't easy, but later environmental sampling showed that the acid was highly buffered and diluted when it entered the adjacent open bay. Furthermore, tidal flow and the movement of ships in the area appeared to help reduce the environmental impacts as well. Monitoring continued as the "footprint" of the plume of the discharged acid dissipated throughout the waters.

Fortunately, a smart use of science helped avoid another explosion in Texas City. The scarred propeller from the S.S. High Flyer sits at the entrance to the Port at Texas City as a reminder of a less fortunate emergency response which now happened 65 years ago.