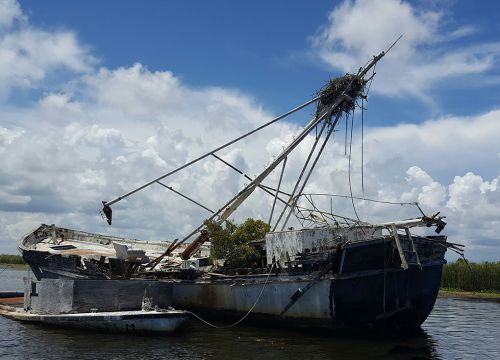 Along Florida's Forgotten Coast, a pair of osprey had built a nest on an abandoned vessel. The U.S. Coast Guard called in NOAA for assistance as they were trying to remove fuel from that boat with minimal impact to wildlife. (NOAA)

AUGUST 9, 2016 -- There is a stretch of the Florida Panhandle east of the more heavily developed beach destinations of Destin and Panama City that some refer to as the "Forgotten Coast." This area has vast tracts of pine forest including large stands of longleaf pine and savanna, towering dunes and nearly undeveloped barrier islands, seemingly endless coastal marsh, and miles and miles of winding shoreline along its expansive bays and coastal rivers. It is no coincidence that much of the area is undeveloped; reserves, wildlife refuges, and other federal and state protected lands and waters occupy a large percentage of the area. However, this flattened landscape of wild greens and blues is occasionally punctuated by the unnatural texture of human influence of a certain type: rusting hulls, broken masts, boats half-submerged in the muddy waters. It was one of these abandoned and decaying vessels that brought NOAA's Adam Davis to Florida's Forgotten Coast.

Birds-Eye View of a Problem

The U.S. Coast Guard as well as state and local agencies and organizations have been working to address potential pollution threats from a number of abandoned and derelict boats sprinkled throughout this region. Vessels like these often still have oils and other hazardous materials on board, which can leak into the surrounding waters, posing a threat to public and environmental health and safety. 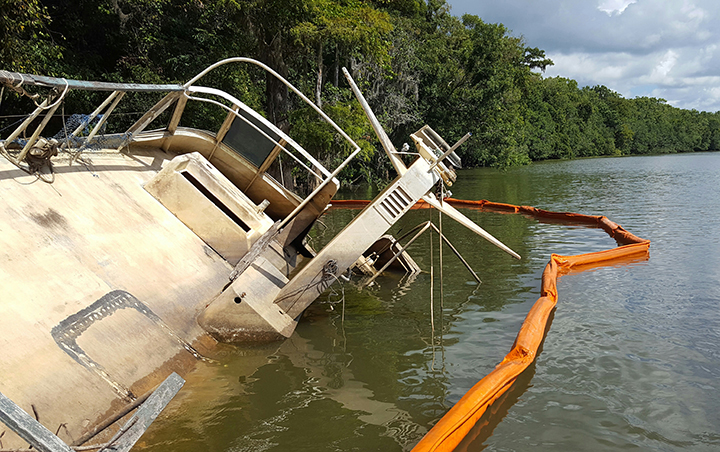 Even a small release of marine fuel in sensitive environmental areas like this can have significant negative environmental consequences. Many abandoned vessels still have fuel and other hazardous materials on board. (NOAA)

As a Scientific Support Coordinator for NOAA's Office of Response and Restoration, Adam Davis provides assistance to the Coast Guard in their pollution response efforts. This support often involves analyzing which natural resources are vulnerable to pollution and the potential fate and effects of oil or chemicals released into the environment. In this case, the Coast Guard called Davis with an unusual complication in their efforts: A pair of osprey had taken up residence on one of these abandoned vessels. Their nest of sticks was perched atop the ship's mast, now bent at a precarious 45 degree angle. The Coast Guard needed to know what kind of impacts might result from assessing the vessel's pollution potential and what might be involved in potentially moving the osprey nest, or the vessel, if needed. As a federal agency, the Coast Guard must adhere to federal statutes that protect wildlife, such as the Endangered Species Act and the Migratory Bird Treaty Act. Essentially, these statutes require the Coast Guard (or other person or organization) to consider what effect their actions might have on protected species, in this case, osprey. This is where Scientific Support Coordinators often can provide some assistance. A large part of their support in this area involves coordinating with the "trustee" agencies responsible for the stewardship of the relevant natural resources. Davis' challenge is evaluating the scientific and technical aspects of the planned action (disturbing the chicks and their parents or possibly moving the osprey nest in order to remove the vessel), weighing possible effects of those actions against threats posed by no action, and communicating all of that in an intelligible way to trustees, stakeholders, and the agency undertaking the action in question. Fortunately, the pollution assessment and removal in the case of the osprey-inhabited vessel proved very straightforward and the abandoned vessels project got off to a good start.

Abandoned But Not Forgotten 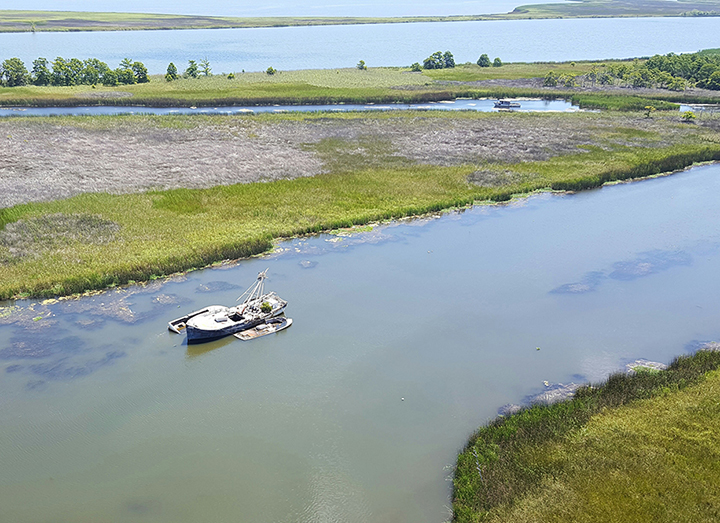 NOAA's Adam Davis helped the U.S. Coast Guard with a project spanning more than 230 miles of Florida coastline and resulted in the removal of hundreds of gallons of fuel and other hazardous materials from six abandoned vessels and one shoreline facility. (NOAA)

Over the course of eight weeks, Davis felt fortunate to contribute in a number of ways to this project. For example, he joined several aerial overflights of the coast from Panama City to St. Marks, Florida, and participated in numerous boat rides throughout the Apalachicola Bay watershed to identify, assess, and craft strategies for pollution removal from abandoned vessels. Ultimately, the project spanned more than 230 miles of coastline and resulted in the removal of hundreds of gallons of fuel and other hazardous materials from six abandoned vessels and one shoreline facility. Most of the fuel was removed from vessels located in highly sensitive and valuable habitats, such as those located along the Jackson and Brother's Rivers. Portions of both of these rivers are located within the Apalachicola National Estuarine Research Reserve and are designated as critical habitat for Gulf sturgeon, a federally threatened species of fish that, like salmon, migrates between rivers and the ocean. 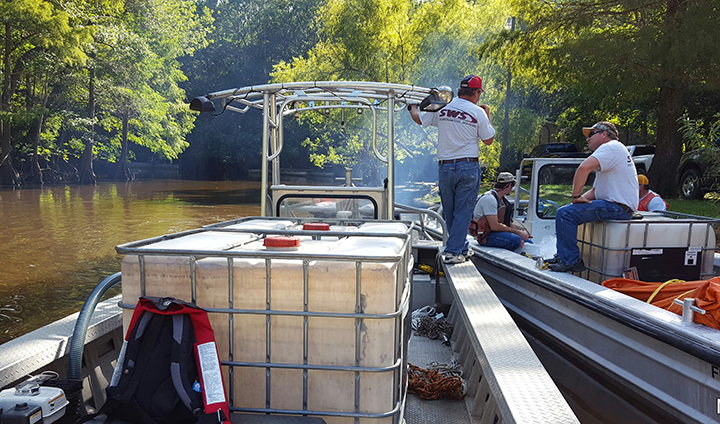 When NOAA supports the Coast Guard with abandoned vessels work, our efforts often involve analyzing which natural resources are vulnerable to pollution and the potential fate and effects of oil or chemicals released into the environment. These Coast Guard boats are equipped to remove fuel from abandoned vessels. (NOAA)

Even a small release of marine fuel in areas like this can have significant negative environmental consequences. Impacts can be even more severe if they occur during a time when species are most vulnerable, such as when actively spawning, breeding, or nesting. In addition, spills in these otherwise pristine, protected areas can have negative consequences for important commercial and recreational activities that rely upon the health of the ecosystem as a whole. While we'd like to be able to remove the entire vessels every time, which can be navigation hazards and create marine debris, funding options are often limited for abandoned vessels. However, the Oil Pollution Act of 1990 enables the federal government to remove the hazardous materials on board and reduce that environmental threat. Davis finds working in the field directly alongside his Coast Guard colleagues to be invaluable. Inevitably, he comes away from these experiences having learned a bit more and increased his appreciation for the uniqueness of both the people and the place. He hopes that makes him even better prepared to work with them in the future—and in the beautiful and remote wilds of the Forgotten Coast. 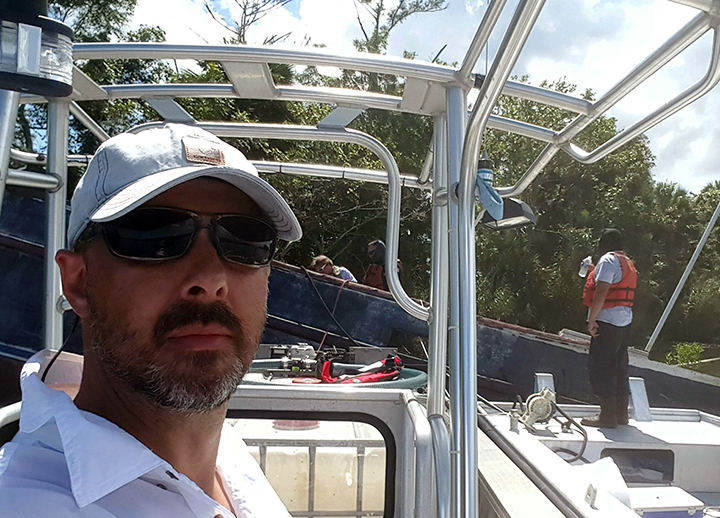 NOAA's Adam Davis, left, on a Coast Guard boat removing oil from a derelict vessel along Florida's Forgotten Coast. (NOAA)
Back to top