FEBRUARY 5, 2016 -- Did you know that oil spills occur every day in U.S. waters? Rivers bustling with ship traffic, such as the Mississippi, are no exception to this rule. In the past few weeks, we've been involved with quite a few accidents involving vessels carrying oil and chemicals on the Lower Mississippi River. These river accidents coincided with high water and swift currents. Despite safeguards for vessel traffic put in place by the U.S. Coast Guard, the river conditions resulted in barges colliding, hitting bridges and ground, and breaking away from their towing vessels. One unlucky railroad bridge in Vicksburg, Mississippi, has been hit by vessels five times already this year. Even now, the NOAA River Forecast Center reports that the Lower Mississippi is experiencing moderate flood conditions. It's difficult to navigate a fast-moving river with a tow of barges at any flow—and extremely challenging when the flow is high and fast. In spite of everyone's best efforts, under conditions like these, accidents can and do still happen, and investigations are ongoing into the precise causes. Luckily, most of the incidents that have occurred were relatively minor, resulted in no injuries to vessel crews, and all spills received immediate responses from state and federal agencies. Still, when oil or chemicals spill into rivers, we know that they differ from spills in the ocean or along coasts, and therefore present different challenges for spill responders. Here are just a few of the dozen or so spills and near-spills we know of and which have been keeping our spill modelers, chemists, and Scientific Support Coordinators busy over the past few weeks. January 21, 2016: A barge being towed by the UTV Amy Frances struck the Natchez Bridge, where Highway 84 crosses over the Lower Mississippi River between Mississippi and Louisiana, in the vicinity of Mile Marker 363. As a result, two of the barge’s tanks were damaged, spilling slurry oil, which our chemical lab confirmed was denser than water. That means this oil sinks. In the wake of this oil spill, one of our Scientific Support Coordinators helped survey the river to detect sunken oil. Given the river’s very fast and turbulent water at the time, we think any oil released from the damaged tanks was immediately broken into small droplets and carried downstream while also sinking below the river surface. Any oil that reached the bottom was probably mixed with or buried by the sand moving downstream near the river bottom. This is because rivers that move a lot of water also move a lot of sediment. In addition, we provided information on the expected fate and effects of the barge’s spilled slurry oil and on the animals and habitats that could be at risk. January 25, 2016: Just a few days later, the Coast Guard called on us for advice related to a barge containing liquid urea ammonium nitrate (liquid fertilizer), which sank south of Valewood, Mississippi, at Mile Marker 501 on the Mississippi River. Side-scan sonar indicates the barge is upside-down on the river bottom, approximately 80 feet down. Given the position and water pressure, we believe the chemical cargo stored on the barge was likely released into the river. The chemical is heavier than water and will mix quickly into the water column. Because elevated levels of ammonia can affect aquatic life, our focus was on predicting and tracking where the chemical would go downriver and what would happen to it. Salvage efforts for the barge itself continue. January 26, 2016: The next day, two vessel tows collided upriver of New Orleans, Louisiana, near Mile Marker 130 on the Lower Mississippi River. The collision capsized one of two barges carrying caustic soda, or sodium hydroxide. We provided the Coast Guard with an initial chemical hazard assessment for this chemical, which is a strong base. The release of a large enough quantity of sodium hydroxide could raise the pH of the water around it, posing a risk to local fish and other aquatic life nearby. The barge is secure, but righting it is difficult in the swift currents. No pollution release has been reported to date.

Science for Spills of All Kinds

During these kinds of spills, we have to be ready to provide the same round-the-clock, science-based support to the Coast Guard and other agencies as big spills like the Deepwater Horizon in the Gulf of Mexico. For example, if a chemical has spilled into a river, we need to know where it's going to go, what's going to happen to it, and what, if any, species will be harmed by it. To help answer the "where's it going?" question, our response specialists use the spill trajectory tool, GNOME, to predict the possible route the pollutant might follow. To better understand the pollutant and its possible effects, we use software tools such as CAMEO Chemicals to provide information about the chemical's properties, toxicity, and behavior as it is diluted by the river water. Our Chemical Aquatic Fate and Effects (CAFE) database contains information on the effects of thousands of chemicals, oils, and dispersants on aquatic life. The Mississippi River and its floodplain are home to a diverse population of living things. On the Lower Mississippi, there may be as many as 60 separate species of mussel. To protect vulnerable species, we use our Environmental Sensitivity Index maps and data to report what animals or habitats could be at risk, particularly those that are threatened or endangered. Keeping responders and the public safe and minimizing environmental harm are two of our top priorities during any spill, no matter the size. 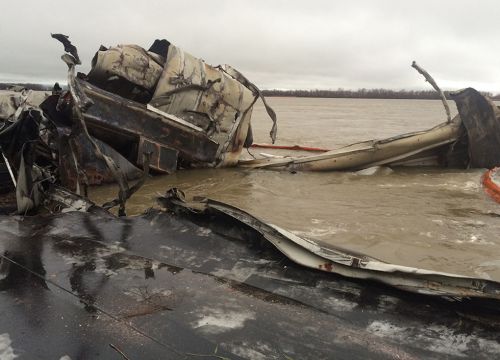 A barge carrying slurry oil being pushed by the towing vessel Amy Francis hit the Natchez-Vidalia Bridge, Jan. 21, 2016. The barge reportedly has a maximum potential of more than 1 million gallons of slurry oil on board. (U.S. Coast Guard) 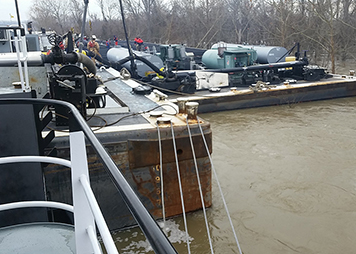 Response crews remove oil from the damaged MM-46 barge, Jan. 23, 2016, on the Mississippi River. Crews estimate that approximately 76,000 gallons of clarified oil mixture is still unaccounted for. Crews continue to take soundings of the damaged barge tank to determine the amount spilled while assessment teams work to locate missing product. (U.S. Coast Guard)
Back to top