After Decades of Pollution, Bringing Safe Fishing Back to Kids in Southern California

This week, NOAA’s Office of Response and Restoration is looking at the range of values and benefits that coastal areas offer people—including what we stand to lose when oil spills and chemical pollution harm nature and how we work to restore our lost uses of nature afterward. APRIL 7, 2016 -- Polluted waters and polluted fish seem like obvious (and good) reasons to skip a fishing trip at such a beach, and they are. For a long time, that was the case for a certain slice of coastal southern California, and those skipped fishing trips really add up. Fortunately, NOAA and our partners are responsible for making up for those trips never taken and do so through the Natural Resource Damage Assessment process. From the late 1940s to the early 1970s, factories, including one owned by the Montrose Chemical Corporation, released several million pounds of DDT and roughly 256,000 pounds of PCBs through ocean outfall pipes onto the Palos Verdes Shelf off of southern California. These chemicals made their way up the food chain, impacting fish and wildlife, and in turn, people too. By 1991, the high chemical concentrations in fish prompted the California Office of Environmental Health and Hazard Assessment to issue its first consumption advisory for common sportfish found along the southern California coast. At the same time, media reports amplified the message that fish were contaminated in this area, which resulted in a large number of anglers completely shying away from fishing within the contaminated zone—whether the fish they were catching were affected or not. In addition, unaware of the dangers, low-income, subsistence anglers continued to catch and eat contaminated fish. All of these factors contributed to a measurable impact to these types of fishing opportunities in southern California, prompting the need to restore them.

Following a natural resource damages settlement in 2000, NOAA's Montrose Settlements Restoration Program (MSRP) was developed to restore wildlife, fishing, and fish habitat that were harmed by DDTs and PCBs in the southern California marine environment. In our 2005 restoration plan [PDF], we identified the need for a public information campaign targeted to youth and families, which would help anglers make informed decisions about what to do with the local fish they caught. Our program was also hoping to change the public perception about local fishing by giving anglers information about alternative, safe fish species to catch and consume and which species to avoid. Starting in 2007, we funded and supported a youth fishing outreach mini-grant program, one of the major components of this campaign. For this program, we teamed up with local fishing clubs, youth groups, environmental organizations, aquaria, and the City of Los Angeles to educate young people and their families about safe fishing practices. The program focused on three key and seven secondary messages related to recreational fishing in the area and included a hands-on fishing component. Participating groups also distributed our What’s the Catch? comic books [PDF] and fish identification cards [PDF] to youth who took part in the program. Some of the activities included touring a local aquarium to reinforce fish identification and playing interactive games that demonstrated bioaccumulation of chemicals in the food chain. Since the campaign started in 2007, over 20,000 youth have participated in our fishing outreach program through eight participating organizations. All of these organizations were serving low-income or at-risk youth ages 5-19 years old and included having kids actually fish from either a boat or pier.

Starting in 2012, we started surveying youth, teachers, and counselors at the end of each fishing outreach program. Featuring questions such as "Did you enjoy the fishing today?" and "Did you learn how to identify fish which are safe to eat?" these surveys helped us understand whether kids were actually learning the program's key messages. 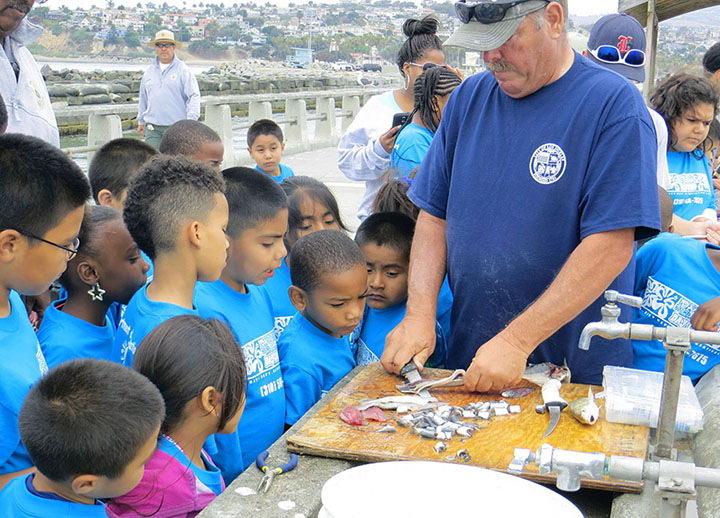 Staff from the City of Los Angeles show kids how to properly fillet a fish to reduce their intake of contaminants. (NOAA)

We found that the program improved each year. By 2015 at least 86% of youth understood our top three key messages:

The frequency and type of secondary messages that were taught by our partnering organizations varied among programs. In most cases, programs improved with teaching these concepts each year, with at least 77% of youth understanding most of the secondary messages:

We also surveyed third, fourth, and fifth grade teachers that participated in the Fun Fishing Program at The SEA Lab in Redondo Beach, California. Teachers evaluated the usefulness of our comic book and fish identification cards, which they received before their field trip. At least 96% of teachers surveyed over four years agreed that the comic book presented useful information for their students, captured student’s interests, and was a resource they could easily use in the classroom. For the fish identification card, at least 87% of teachers felt similarly about this educational tool. 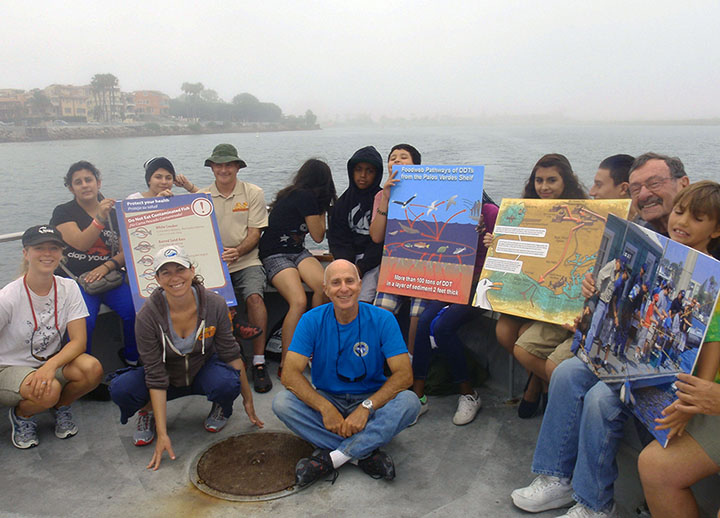 Since the campaign started in 2007, over 20,000 kids have participated in the fishing outreach program through eight participating organizations, all of which worked with low-income or at-risk youth. Here, a group of kids on board a boat with volunteers from Marina Del Rey Anglers show off some of the educational signs used in the program. (NOAA)

We also know that students who participated in the program at The SEA Lab remembered what they learned from their field trip six months later. More than half of the students we surveyed at this later date recalled seven out of 10 program messages correctly and were making healthier decisions when eating fish. Teachers who were also surveyed during this time showed that more than 50% were occasionally teaching concepts related to six of the program messages in their classrooms. In the final year of this fishing outreach program (due to the full use of funding allocations outlined in the restoration plan), we are planning to support two organizations, The SEA Lab and the City of Los Angeles, in summer and fall 2016. The program has been hugely successful at improving the health of children and their families and introducing them to the joyful sport of fishing, while showing lasting impacts on teachers and students. This success is due in a big way to the dedication of our many partners and especially those who provided thousands of volunteer hours. 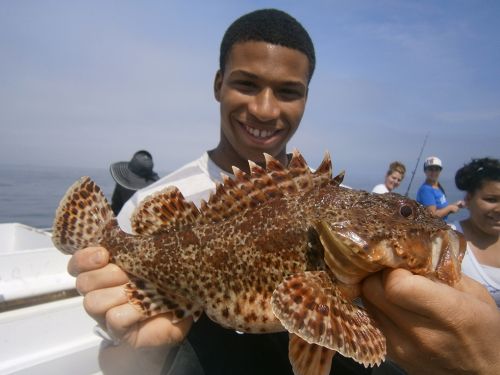 A boy participating in the Montrose youth fishing program shows off his catch, a scorpion fish, from the Betty-O fishing boat with Marina Del Rey Anglers in southern California. (NOAA) 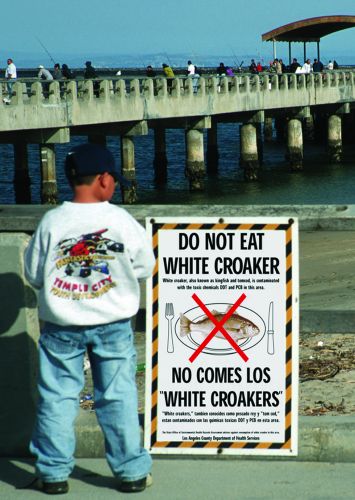 Decades of pollution dumped onto the Palos Verdes Shelf off of southern California later led to fish consumption advisories, warning people of the dangers of eating contaminated fish. (NOAA)
Back to top