After Opening up a Pennsylvania Creek for Fish, Watching Recovery Follow

This is a guest post by Laura Craig, Ph.D., Associate Director of River Restoration, American Rivers. NOVEMBER 20, 2014 -- Early settlement along Pennsylvania's Darby Creek relied upon dams to turn the water wheels of mills, powering economic growth. However, as time wore on, the dams on this tributary of the Delaware River fell into disrepair and these days no longer serve a function. Instead, they have been blocking the passage of fish along this creek. That is, until now. In late summer of 2012, American Rivers and our project partners, NOAA's Damage Assessment, Remediation, and Restoration Program and the Pennsylvania Fish and Boat Commission, began tearing down some of those now-defunct dams as part of a multi-year effort to restore Darby Creek. Initiated in 2007, the effort involved removing three dams near Philadelphia: Darby Borough Dam, Hoffman Park Dam, and Kent Park Dam. In addition, we took out a set of abandoned railroad piers, realigned an 800 foot section of the creek, and restored 10 acres of shoreline habitats. We removed these barriers to improve passage for a range of resident and migratory fish, including American shad, hickory shad, alewife, river herring, American eel, bass, shiners, and suckers. The project also aims to enhance stream habitat, alleviate flooding, benefit public safety, and restore free-flowing conditions along the creek. Overall, the Darby Creek Restoration Project connected 2.6 miles of upper stream to the lower 9.7 miles, which link directly to the Delaware River. It was here in 2004 when the Athos I tanker spilled oil that would spread along miles of the Delaware and its tributaries like Darby Creek. This $1.6 million dollar effort to restore Darby Creek was funded primarily by the Natural Resource Damage Assessment settlement from the Athos I oil spill. Additional funding came from the Pennsylvania Department of Environmental Protection's Growing Greener Program and the National Fish and Wildlife Foundation. All restoration activities were completed in June 2013, but we are still monitoring the restored areas to ensure the area is recovering. At the former dam locations we are already seeing recovery of shoreline areas planted with a diverse mix of seed, shrubs, and trees. Restoring vegetation along the creek stabilizes exposed soil and reduces erosion in the short term and provides shade, habitat, and food sources over the long term. We are also observing positive changes to stream habitat as a result, including fewer actively eroding banks and less fine sediment clouding the creek's waters.

Before (left) and after (right) photos of Darby Creek where the Kent Park dam was removed with funding for restoration after the 2004 Athos oil spill. (American Rivers)

In terms of fisheries, we are noting a shift since the dams were removed toward a resident community of fish that prefer free-flowing water conditions. While we haven't yet encountered any migratory fish at the former dam locations, this fall fisheries biologists with the Pennsylvania Fish and Boat Commission came across several pods of very young blueback herring. The young fish were located in the tidal portion of the creek, near where it joins the Delaware River at the John Heinz National Wildlife Refuge. This is great news, because it suggests that blueback herring are using the lower part of the tributary as a nursery. In future years we hope to see them advance up the creek to the locations where the dams were removed. For more information on the Athos I oil spill and the resulting restoration, visit response.restoration.noaa.gov/athos and http://www.darrp.noaa.gov/northeast/athos/restore.html. 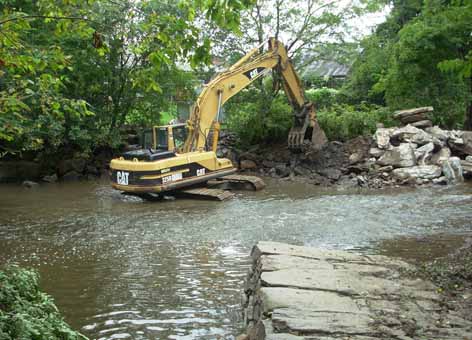 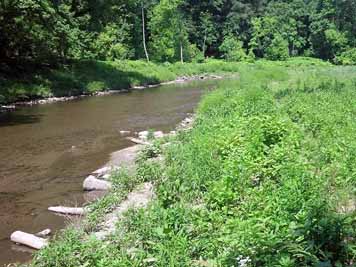 Shown in 2014, this portion of Darby Creek now features restored shoreline habitat with stabilizing structures. (American Rivers)
Back to top