After Remaking the Way for Fish, Huge Increases Follow for Migrating Herring in a Massachusetts River 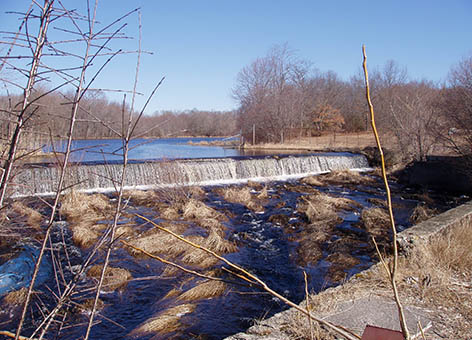 The Sawmill Dam before NOAA helped install "fishways," which allow fish to pass more easily over dams, on the Acushnet River in Massachusetts. (NOAA)

A version of this story first appeared on the NOAA Restoration Center website on April 8, 2013. APRIL 10, 2013 — In 2007, as part of a habitat restoration project, NOAA helped to install stone "fishways" at two dams on the Acushnet River in Massachusetts. These fishways, designed to more closely resemble conditions found in nature, are located in the river channel and allow migrating fish to gradually gain enough elevation to successfully pass over the dams. Since construction, there has been an astounding 1,140% increase in migrating herring able to pass over the dams and access prime spawning grounds, according to data collected by the Massachusetts Division of Marine Fisheries [PDF].

Migrating fish, including river herring and American eels, now have much better access to habitat all along the Acushnet River, which runs 8.5 miles from the spawning areas of the New Bedford Reservoir into New Bedford Harbor and empties into Buzzards Bay. This means more opportunities for herring to grow, thrive, and spawn. Herring are caught commercially and are also important prey fish for other commercial and recreational fish species, such as cod. But, due to very low numbers, there is currently a moratorium on the take of river herring from Massachusetts waters. 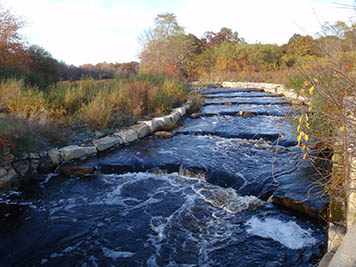 After 2007, when NOAA helped improve fish passage over two dams on the Acushnet River in Massachusetts, herring numbers passing through the river increased dramatically. Here, you can see the completed fishway on the Sawmill Dam. (NOAA)

Between the 1940s and the 1970s, electrical parts manufacturers discharged wastes containing polychlorinated biphenyls (PCBs) and toxic metals into New Bedford Harbor, resulting in high levels of contamination. NOAA, through the Damage Assessment Remediation and Restoration Program (DARRP), worked with the Commonwealth of Massachusetts and the Department of Interior to fund the design and construction of these fishways. They are part of a restoration plan developed in response to decades of industrial pollution in New Bedford Harbor, a major commercial fishing port and industrial center in southeastern Massachusetts.

According to NOAA, part of this site held the "highest concentrations of PCBs ever documented in a marine environment." So far, 34 projects—including these fishways—have been completed to restore natural resources that were injured or lost due to the contamination. Read more on the case and get the latest updates on restoration. This spring, scientists are hoping to see even bigger runs of herring on the Acushnet. Want to see them in person? The third and fourth weeks of April should be peak migration time for these fish—check out this viewing guide for more information.