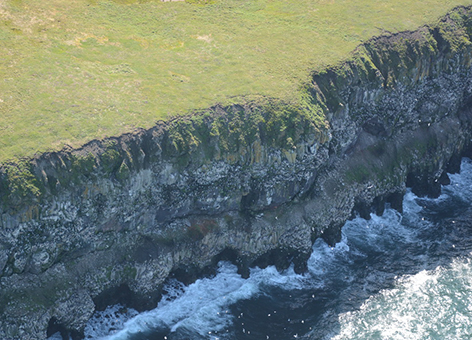 Alaska's tidal shoreline measures over 46,600 miles (75,000 km), longer than the shorelines of all the lower 48 states combined. Now imagine for a minute the work involved in flying helicopters low along that entire shoreline, collecting high-resolution imagery and detailed classifications of the coast's geologic features and intertidal biological communities.

No small endeavor, but that's exactly what the Alaska ShoreZone Coastal Inventory and Mapping Project—a unique partnership between government agencies, nongovernmental organizationons, and private industry—has been doing each summer since 2001.

Since then, ShoreZone has surveyed Alaskan coasts at extreme low tide, collecting aerial imagery and environmental data for roughly 90% of Alaska's coastal habitats and continues to move towards full coverage each year. Collecting the vast amounts of imagery and data is a great accomplishment in and of itself, but ShoreZone, with help from NOAA's National Marine Fisheries Service, has done an equally incredible job at making their entire inventory accessible to the public. Just think how this valuable and descriptive information could be used. Planning for an Alaskan kayak trip next summer? ShoreZone can help you prioritize which beaches will save your hull from unwanted scratches.

Trying to identify areas of critical habitat for endangered fishes? ShoreZone can help you in your research. Indeed, ShoreZone has many applications. For the Office of Response and Restoration, ShoreZone is an invaluable tool that serves alongside NOAA's Environmental Sensitivity Index (ESI) maps and data as a baseline for the coastal habitats of Alaska and is currently being used for environmental planning, preparedness, and Natural Resource Damage Assessment planning in Alaska.

Left, the Arctic's rapidly changing coastline is visible in this photo from the August 2012 Bureau of Ocean and Energy Management ShoreZone survey of Alaska's North Slope (Mandy Lindeberg/NOAA and ShoreZone.org) Right, St. Lawrence Island, Alaska, lies south of the Bering Strait. Another view of the island’s coast from the July 2013 ShoreZone survey. (ShoreZone.org)

One of the many ways to access ShoreZone imagery and data is through Arctic ERMA, NOAA's online mapping tool for environmental response. There are several advantages to this. For example, the National Marine Fisheries Service used ShoreZone imagery and data to designate critical habitat areas for endangered rockfish in Washington's Puget Sound, a process that could also be applied to Alaska if necessary. That information could quickly be integrated into ERMA and displayed on a map allowing you to view the data used to determine those locations as well. As updates and additions to the imagery database become available they will also be available in Arctic ERMA. The Bureau of Safety and Environmental Enforcement (BSEE) has provided funding to complete the imagery processing and habitat mapping for the North Slope of Alaska. BSEE also provided funding to finish Arctic ERMA and to develop the internet-independent Stand-alone ERMA. The efforts are complementary and strategic given the increased activity in the Arctic. 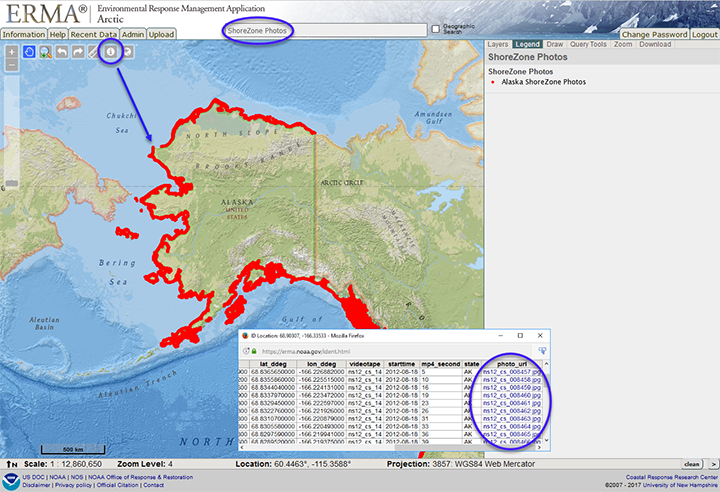 To prepare for this increase in activity, the ShoreZone and ERMA teams are working to incorporate ShoreZone data into Stand-alone ERMA for use when Internet connectivity is unreliable. The beauty of the photos included here is deceptive. A majority of Alaska's shoreline is rugged, unforgiving, and remote. Having access to high-resolution imagery along with environmental and response-focused data in the kind of Internet-independent package that ShoreZone and ERMA provide would be an indispensable tool during a hazardous incident like a ship collision, oil spill, or search and rescue mission. This is just one way NOAA and ShoreZone are working together to strengthen our commitment to the coastal environments and communities of Alaska. 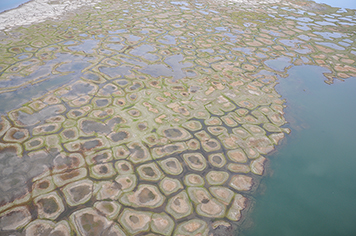 The rapidly changing coastline of the Arctic is visible in this photo from the August 2012 Bureau of Ocean and Energy Management ShoreZone survey of the North Slope of Alaska. (Mandy Lindeberg/NOAA and ShoreZone.org)
Back to top