JANUARY 28, 2016 -- While the best way to deal with oil spills in the ocean is to prevent them in the first place, when they do happen, we need to be ready. Cleanup is difficult, and there are no magic remedies to remove all the oil. Most big oil spills require a combination of cleanup tools. This week the Alaska Regional Response Team, an advisory council for oil spill responses in Alaska, has adopted a revised plan for one of the most controversial tools in the toolbox: Chemical dispersants.

How Dispersants Are Used in Oil Spills

Dispersants are chemical compounds which, when applied correctly under the right conditions, break crude oils into smaller droplets that mix down into the water column. This reduces not only the surface area of an oil slick but also the threats to marine life at the ocean surface. By making the oil droplets smaller, they become much more available to natural degradation by oil-eating microbes. Dispersants are controversial for many reasons, notably because they don't remove oil from the marine environment. Mechanical removal methods are always preferred, but we also know that during large oil spills, containment booms and skimmers can get overwhelmed and other pollution response tools may be necessary. This is a big concern especially in Alaska, where weather and remote locations increase the logistical challenges inherent in a large scale oil spill response. Although dispersants get a lot of attention because of their extensive use after the 2010 Deepwater Horizon oil spill, they actually are used rarely during oil spills. In fact, dispersants have only been applied to about two dozen spills in the United States in the last 40 years. The only time they were tested during an actual spill in Alaska was during the Exxon Valdez oil spill in 1989. Some oils like light and medium crude are often dispersible and others, like heavy fuel oils, often are not. In some cases dispersants have worked and in others they haven't. The results of the Exxon Valdez testing were unclear and still subject to debate. So, why have a plan for something that is rarely used and may not be successful? Probably the biggest reason is pragmatic. Dispersants work best on fresh, unweathered oil. Ideally, they should be applied to oil within hours or days of a spill. Because time is such a critical factor to their effectiveness, dispersants need to be stockpiled in key locations, along with the associated aircraft spraying and testing equipment. People properly trained to use that equipment need to be ready to go too.

A New Plan for Alaska

Now, dispersants have already been an approved oil spill response tool in Alaska [PDF] for a number of years. This new plan improves the decision procedures and designates areas where dispersant use may be initiated rapidly while still requiring notification of the natural resource trustees, local and tribal governments, and other stakeholders before actual use. Alaska's new plan specifies all the requirements for applying dispersants on an oil spill in Alaskan waters and includes detailed checklists to ensure that if dispersants are used, they have a high probability of success. The new plan sets up a limited preauthorization zone in central and western Alaska, and case-by-case procedures for dispersant use elsewhere in Alaska. The plan also recognizes that there are highly sensitive habitats where dispersant use should be avoided. In addition, preauthorization for using dispersants exists only for oil spills that happen far offshore. Most states have similar preauthorization plans that allow dispersant use starting three nautical miles offshore. The new Alaska plan starts at 24 miles offshore. We realize that even far offshore, there may be areas to avoid, which is why all of the spill response plans in central and western Alaska will be revised over the next two years. This will occur through a public process to identify sensitive habitats where dispersant use would be subject to additional restrictions.

As the NOAA representative to the Alaska Regional Response Team, Doug Helton appreciates all of the effort that has gone into this plan. "I am grateful we developed the many procedures through a long and inclusive planning process," he commented, "rather than in a rush on a dark and stormy night on the way to an oil spill." "But I hope this plan will never be needed," he continued, "because that will mean that a big oil spill has happened. Nobody wants that, especially in pristine Alaskan waters." Any decision to use dispersants will need to be made cautiously, combining the best available science with the particular circumstances of an oil spill. In some cases, dispersants may not be the best option, but in other scenarios, there may be a net environmental benefit from using dispersants. Having the dispersants, equipment, plans, and training in place will allow us to be better prepared to make that critical decision should the time come. At the same time, NOAA and our partners are continuing to research and better understand the potential harm and trades-offs of dispersant use following the Deepwater Horizon oil spill. We are participating in an ongoing effort to understand the state of the science on dispersants and their potential use in Arctic waters. (The University of New Hampshire is now accepting comments on the topic of dispersant efficacy and effectiveness.) You can find Alaska's new dispersant policy and additional information at the Alaska Regional Response Team website at www.alaskarrt.org. For more information on our work on dispersants, read the April 2015 article, "What Have We Learned About Using Dispersants During the Next Big Oil Spill?" and July 2013 article, "Watching Chemical Dispersants at Work in an Oil Spill Research Facility." 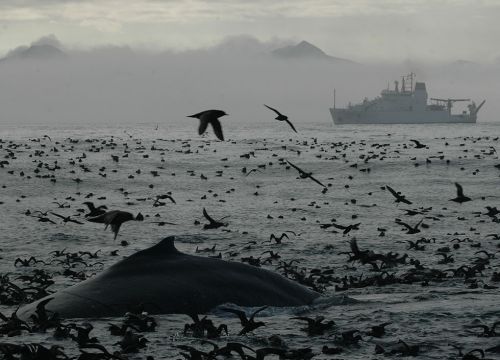 By breaking crude oils into smaller droplets, chemical dispersants reduce the surface area of an oil slick as well as the threats to marine life at the ocean surface, such as whales and seabirds. (NOAA) 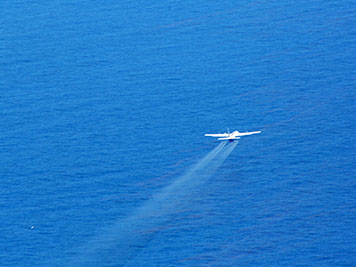 Although only used once in an Alaskan oil spill, dispersants have already been an approved oil spill response tool in the state for a number of years. This new plan improves the decision procedures and designates areas where dispersant use may be initiated rapidly. (U.S. Environmental Protection Agency)
Back to top