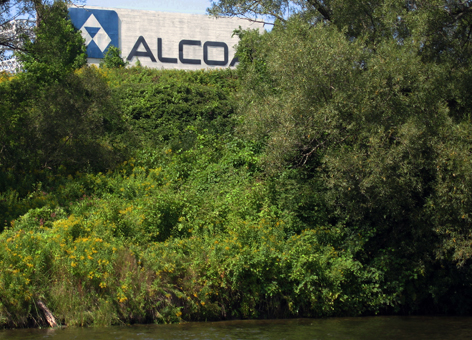 For decades, two Alcoa alumininum facilities discharged toxic PCBs into the St. Lawrence River, its tributaries the Grasse and Raquette Rivers, and the surrounding area in Massena, N.Y. Alcoa and Reynolds are paying $19.4 million to settle the resulting damages to natural resources. (NOAA)

MARCH 27, 2013 — In the northern reaches of upstate New York, just across and upriver from Canada, two factories chug along. Both now owned by aluminum manufacturer Alcoa, these factories have been producing aluminum on the banks of the Grasse and St. Lawrence Rivers since 1903 and 1958. And like many other industries in the past, these two Alcoa plants in Massena, N.Y., discharged a stream of toxic pollutants into the water, air, and soil around them. Now, only a few miles away, dozens of young Mohawk children at the Akwesasne Freedom School attempt to reclaim their Mohawk heritage and a connection with the natural world and traditional practices endangered in part by the area's contaminated history. Today, the majority of the $19.4 million settlement with Alcoa and the former Reynolds Metals Company will go toward healing past wounds to this rich ecological and cultural environment with a suite of proposed restoration projects.

A History of Pollution on the St. Lawrence

Starting in the late 1950s, Alcoa and Reynolds used polychlorinated biphenyls (PCBs) in hydraulic fluid and electrical equipment as they produced aluminum at these two factories. Nearby, General Motors Central Foundry (GM) also used PCBs in the hydraulic fluids when building automotive engines and in electric equipment. The PCBs from these three facilities in turn made their way into the St. Lawrence River, its tributaries the Grasse and Raquette Rivers, and the surrounding area. Banned in 1979, PCBs are a group of persistent and highly toxic compounds which, in addition to causing cancer in animals, affects growth, behavior, reproduction, immune response, and neurological development. Manufacturing activities at these three factories released a slew of other industrial pollutants [PDF] that impacted the environment, including aluminum, fluoride, cyanide, and polycyclic aromatic hydrocarbons (PAHs, a hazardous component of oil, coal, and tar). In 2000, Alcoa purchased Reynolds and as a result, Reynolds' facility is now known as Alcoa East. Its sister facility, Alcoa West, is the longest continually operating aluminum facility in the world. The third, now-shuttered, General Motors factory sits next door to Alcoa East and has already paid approximately $1.8 million for environmental restoration in separate bankruptcy proceedings. Combined with $18.5 million from Alcoa's settlement, the Alcoa and GM settlements will provide approximately $20.3 million for specific projects to restore access to recreational fishing, fish and wildlife, and Mohawk traditional practices and language.

The St. Lawrence Environmental Trustee Council, a group of federal, state, and tribal governments which includes NOAA, has coordinated with the companies to assess the damages to ecological resources, recreational fishing, and the St. Regis Mohawk Tribe's cultural resources. Due to the history of industrial pollution released from these factories into the St. Lawrence River watershed, the sediments, fish, birds, mammals, reptiles, and amphibians along the St. Lawrence, Grasse, and Raquette Rivers have all suffered. Under the U.S. Environmental Protection Agency and the New York State Department of Environmental Conservation, various cleanup activities, such as dredging and capping contaminated river sediments, have been attempting to remediate the polluted environment. 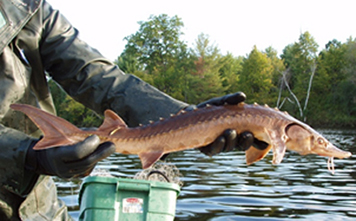 Improvements to spawning habitat and stocking of lake sturgeon is one of the restoration projects preferred by the natural resource trustees. (Saint Regis Mohawk Tribe)

As part of a process that moves beyond cleanup, the trustees, led by the St. Regis Mohawk Tribe, have identified preferred recreational fishing, ecological, and cultural restoration projects to compensate the public for the resulting environmental injuries. For example, contaminants from the three facilities degraded adult and juvenile fish habitat for species such as the American eel (currently being considered for Endangered Species Act protection) and the state-threatened lake sturgeon. The presence of toxic PCBs triggered fish consumption advisories for the St. Lawrence, Grasse, Raquette, and St. Regis Rivers. In place since 1984, these advisories have resulted in an estimated 221,000–250,000 fewer fishing trips on these rivers, both in the past and into the future. In response, four new boat launches will be constructed and one existing launch will be upgraded to provide shoreline and in-river fishing access points. The trustees also will protect and restore wetland and upland habitat, enhance stream banks, improve impeded fish and other wildlife passage through the rivers, enhance fish stocks and spawning habitat, and restore bird habitat. The preferred restoration projects are described in the St. Lawrence River Environment Restoration Compensation and Determination Plan [PDF]. The public can comment on this plan and on the Alcoa $19.4 million natural resource damage settlement, which includes $18.5 million for restoration and nearly $1 million in reimbursement for past environmental assessment costs.

Reconnecting to the Natural World

One of the most creative examples of the preferred restoration projects centers not on restoring natural resources such as sturgeon, a species important to the St. Regis Mohawk Tribe, but on restoring the unique culture of the Mohawks, which is tied closely to the natural world. 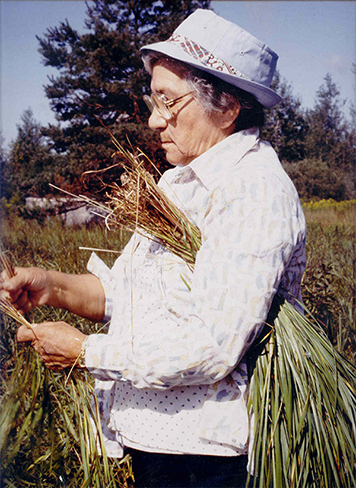 Grassy meadows on both sides of the Lower Grasse River were set aside for the Mohawks of Akewsasne by the Seven Nations of Canada Treaty of 1796. The name Akwesasne means "the land where the partridge drums," a reference to the sound created by the rapids of the St. Lawrence River prior to the construction of dams. The people of Akwesasne were directly impacted by the contamination from the Alcoa, Reynolds, and GM factories. An innovative tribal apprenticeship program will seek to restore traditional Mohawk cultural practices that have been lost or impaired since contamination limited use of the uplands, the rivers, and their natural resources. The tribe, as a trustee, has targeted four traditional areas for apprentices to receive hands-on training from experienced masters:

The apprenticeship program will provide experience in directly harvesting, preparing, preserving, and producing traditional Mohawk cultural products while promoting Mohawk language in each aspect of the training. Restoration funding also will support existing institutions and programs focused on recovering cultural practices and language injured by contaminants from these manufacturing sites. For more information and instructions on how to comment on the preferred restoration projects and the settlement, visit the NOAA Damage Assessment, Remediation, and Restoration Program website.