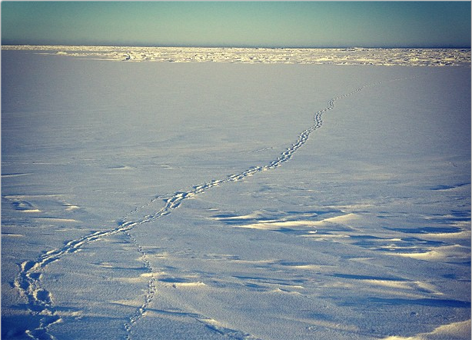 Editor's Note: September is National Preparedness Month. It is a time to prepare yourself and those in your care for emergencies and disasters of all kinds. The following story shows one way NOAA's Office of Response and Restoration is preparing for a potential oil spill emergency in the Arctic. To learn more about how you can be prepared for other types of emergencies, visit www.ready.gov. SEPTEMBER 5, 2013 -- What's the first thing that comes to mind when someone mentions "the Arctic"? For Zach Winters-Staszak, it's the polar bear. As a mapping specialist for OR&R's Arctic ERMA project, Winters-Staszak has had the opportunity to visit the Arctic communities of Barrow, Wainwright, and Kotzebue, Alaska. On those trips, he has been lucky enough to witness a snowy owl (Barrow's namesake), arctic hare, and caribou. Once, he even hired a local expert to take him on an "Arctic safari" to see a polar bear; the tracks they found were less than 12 hours old, but the polar bear itself continues to elude him. On his upcoming trip to the Arctic, however, his chances are greatly improved; this time he is headed out to sea.

This week, Winters-Staszak is returning to Barrow to join the U.S. Coast Guard and a team of scientists for two weeks aboard the Coast Guard Cutter Healy where they will take part in Arctic Shield 2013. Once they are aboard the icebreaker, the team will travel to the edge of the sea ice and begin a drill scenario to test oil spill response technologies in the remote and challenging environment of the Arctic Ocean. The technologies being tested range from unmanned aircraft systems gathering data from above to remotely operated vehicles searching under the ice to skimmers that are designed to collect oil on the ocean's surface. The purpose of this hands-on drill is to gain a better understanding of the challenges involved in responding to a theoretical Arctic oil spill at sea and then define the advantages and any constraints of existing technologies to improve the ability to respond to an actual spill.

Connecting the Dots of Data

As the seasonal extent of Arctic sea ice continues to contract and thin, energy exploration and transportation activities will likely continue to increase in the region, escalating the risk of oil spills and accidents. In anticipation, NOAA and interagency partners are actively preparing for these possible emergencies, and Arctic Shield is a great example of this. This view of the online mapping program Arctic ERMA shows the approximate path of the Coast Guard Cutter Healy from Barrow, Alaska, to the edge of the sea ice, indicated on the map in yellow. Red shows higher concentrations of sea ice. (NOAA) Click to enlarge image.

Winters-Staszak's role will be to connect the various streams of data the science teams will be collecting and incorporate them into a new version of ERMA, NOAA's online mapping tool for environmental response. This latest "stand-alone" version of the tool functions like previous versions of ERMA, except it doesn't need an internet connection. It is common for communities in the Arctic region and for many coastal areas of Alaska to have spotty internet coverage, if coverage is available at all. Stand-alone ERMA is able to map and organize information in a centralized, easy-to-use format for environmental responders and decision-makers when internet connectivity is unreliable. As you read this post, Winters-Staszak be on a plane traveling north. While his first week on the ship is likely to be packed full of activity, he hopes the second week will allow him to write more about his experiences during the cruise. If there is enough internet bandwidth, he will be posting developments from the Healy. He hopes to include information about the technologies being tested, life on the ship, and photos of wildlife. And if he hasn't jinxed myself by now, maybe one of those photos will include a polar bear.