Are You Ready for this Summer's Hurricane Season? 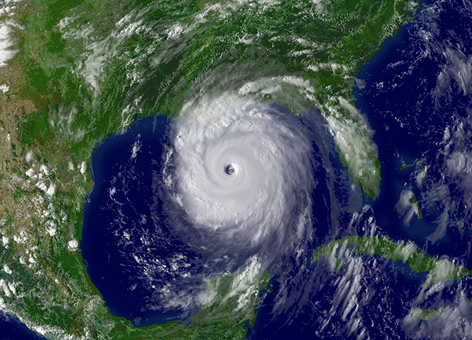 On August 28, 2005, Hurricane Katrina was in the Gulf of Mexico, where it powered up to a Category 5 storm on the Saffir-Simpson hurricane scale, packing winds estimated at 175 mph. (NOAA)

Last week I was at a regional emergency response meeting in Addison, Texas, and sat next to Greg Pollock, Deputy Commissioner for the Texas General Land Office. During the meeting, Greg nudged my shoulder, showing me an email alerting him of the potential for Hurricane Barbara to cross from the Pacific Ocean into the Bay of Campeche—making it a potential threat to the Gulf of Mexico.

We were in the last week of May and threats to the Gulf of Mexico are rare this early. I hadn't even started my hurricane season routine of checking the NOAA National Hurricane Center's website every morning before even driving to my office at NOAA's Gulf of Mexico Disaster Response Center.

Following Greg's prompt, I went online and read the updated forecast from NOAA. Hurricane Barbara would impact southern Mexico but likely dissipate crossing it (which is exactly what happened to this tropical storm). At the time, the threat to the Gulf of Mexico was low, but still something to keep an eye on.

Ready to Help Before, During, and After a Disaster

On the front line is NOAA's National Weather Service, the trusted, round-the-clock source of information about severe weather threats. Emergency managers and the public alike depend on them to provide accurate and timely storm predictions and forecasts. I use their online information daily to stay up-to-speed on what storms may be developing for the Gulf of Mexico. The Disaster Response Center provides NOAA with additional support and coordination during natural and manmade disasters. We put our effort into being prepared to respond.

This year, NOAA predicts a worse-than-normal year for tropical storms. "Worse" is my personal way of stating the official forecast of a more-active-than-average or extremely active season, as predicted by NOAA's Climate Prediction Center. Yet, it only takes one storm to bring significant destruction to the coast. For example, in 1992, Hurricane Andrew, a category 5 hurricane, blew in during a less active tropical storm season and struck Florida and Louisiana. The result was 65 people killed (both directly and indirectly) and some $26 billion in damage, mostly in Florida. Only three other hurricanes in U.S. history have cost more in damages: Katrina (2005), Ike (2008), and Sandy (2012).

Living in or on the edge of the coastal zone in Louisiana and Alabama most of my life, I do not take hurricane season lightly. This weekend, I'll spend time checking on the status of my hurricane supplies (find out what you should have in your disaster supply kit) and ensuring my daughter, who attends college in New Orleans, has thought through her plans of when and where to evacuate should a storm threaten southeast Louisiana. Coming home to be with her dad in Mobile, Ala., may not be her best option. The many other NOAA emergency response staff and I likely would not be evacuating, but rather positioning ourselves and our resources to help with the consequences of a severe tropical storm or hurricane. Every year, we hope for the best and plan for the worst. We can't control nature, but we can control how prepared we are for what it throws at us.

If you haven't made your hurricane preparedness plans yet, you shouldn't wait any longer now that the 2013 Atlantic hurricane season has officially started.

The National Hurricane Center recently hosted National Hurricane Preparedness Week, and their website has a wealth of resources to help you get ready for this summer’s hurricane season. You can also watch a NOAA video on how to increase your chances of surviving a hurricane and learn more about how to prepare for all types of hazards on the NOAAWatch website.

This is a post by OR&R's Charlie Henry, director of NOAA's Gulf of Mexico Disaster Response Center.