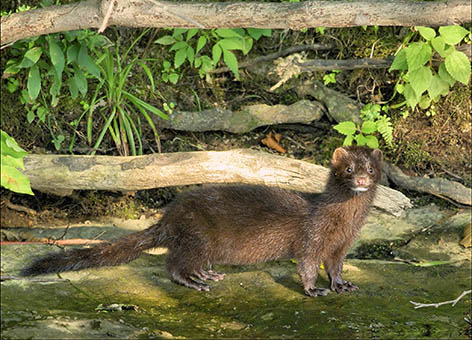 My favorite part of this job is the teamwork among all the people working on this issue, and the interactions with our experts and the public. We know that PCBs can cause serious harm to wildlife and other natural resources. Although a cleanup funded by GE is underway for certain sections of the Hudson River, the dredging GE is doing will leave some areas still contaminated with PCBs. The dredging also cannot compensate for past effects of this PCB contamination on the Hudson River's natural resources. For example, dredging will not make up for all the years that public use of the Hudson River fishery has been impaired by fish consumption advisories. Dredging will not return that lost use to the public. In our planning to determine the effects of PCBs on wildlife, we identified mink health as one area to investigate.

Mink are vulnerable to the effects of PCBs. Hudson River mink eat PCB-contaminated fish and other small creatures, and they ingest contaminated water, soil, and sediments as they look for food and build their dens. This led us to suspect that Hudson River mink might be harmed by PCBs in their environment. Read more to find out how PCB contamination might be affecting mink offspring. [Editor's note: And learn about a past report from the Hudson River Natural Resource Trustees, including NOAA, which found that PCBs permeate nearly every part of the Hudson River.]