Below Zero: Partnership between the Coast Guard and NOAA 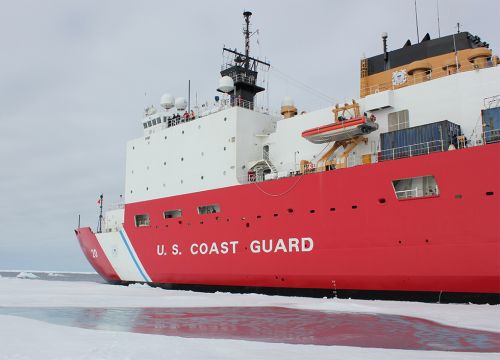 Coast Guard icebreaker Cutter Healy perches next to a shallow melt pond on the ice in the Chukchi Sea, north, of the Arctic Circle July 20, 2016. During Cutter Healy’s first of three missions during their West Arctic Summer Deployment, a team of 46 researchers from the University of Alaska-Anchorage and the National Oceanic and Atmospheric Administration (NOAA) studied the Chukchi Sea ecosystem. U.S. Coast Guard photo by Ensign Brian P. Hagerty/CGC Healy

Feb. 28, 2017 -- For more than 200 years, the U.S. Coast Guard and National Oceanic and Atmospheric Administration (NOAA) have partnered together in maritime resiliency, environmental sustainability and scientific research. In fact, a variety of NOAA projects encompassed over 50 percent of Coast Guard Cutter Healy operations for 2016, including a Coast Guard and NOAA collaborative effort to chart the extended continental shelf and survey marine habitats and biodiversity. Today, more than ever in the past, the Coast Guard and NOAA are working together on numerous levels of profession in the U.S. Arctic Region, which happens to be Coast Guard Alaska‘s northern area of responsibility, or AOR. From daily sector operations and district-led full scale exercises to partnering on the national level in workgroups under the Arctic Council, Coast Guard and NOAA have a strong working relationship supporting and representing the U.S. in cold weather operations and Arctic initiatives.

In a recent search and rescue case off the coast of the Pribilof Islands, where the fishing vessel Destination sank suddenly in the frigid seas, NOAA’s National Weather Service (NWS) Regional Operations Center was the Coast Guard’s ‘first call’ to get current weather information in support of search plan development. NOAA and NWS also played a role in setting the stage for the potential cause of the incident by providing sea state information and the dangerous effects of sea spray icing on vessels. For SAR planning and other mission support, NOAA’s NWS Ice Program also works with the Port of Anchorage on a daily basis with regards to ice conditions all along the coastline of Alaska, and provides bi-weekly regional weather briefs for the district and sector command centers; they are part of the ‘team’ when it comes to response planning and preparation. NOAA and the Coast Guard continue to work diligently together to ensure all possible capabilities from the U.S. Government enterprise are available to support homeland security and Arctic domain awareness on a broader, high level position.

On a national level, personnel from Coast Guard and NOAA headquarters partner together as members of the Arctic Council’s Emergency Prevention Preparedness and Response working group. This group addresses various aspects of prevention, preparedness and response to environmental emergencies in the Arctic. The Coast Guard and NOAA jointly play a large role in ensuring operational support and training mechanisms are in place for vital response capacities and capabilities. 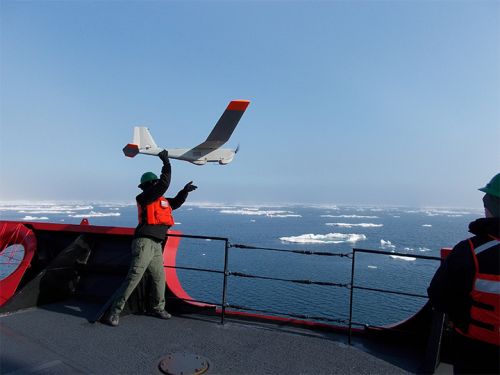 National Oceanographic and Atmospheric Administration scientist Kevin Vollbrecht launches a Puma unmanned aerial vehicle from the bow of the Coast Guard Cutter Healy July 11, 2015. The Puma is being tested for flight and search and rescue capabilities. (U.S. Coast Guard photo)

The Coast Guard also fully employs the use of NOAA’s Environmental Response Management Application (ERMA®) in the Arctic. ERMA is NOAA’s online mapping tool that integrates both static and real-time data, such as ship locations, weather, and ocean currents, in a common operational picture for environmental responders and decision makers to use during incidents. Also used for full scale exercises, in 2016, the Healy employed ERMA onboard to help provide a centralized display of response assets, weather data and other environmental conditions for the incident response coordinators. In the same exercise, NOAA tested unmanned aerial systems for use with Coast Guard operations in the Arctic. Furthermore, NOAA and the Coast Guard are working together with indigenous communities to learn how ERMA can best be used to protect the natural resources and unique lifestyle of the region. ERMA has been in use by the Coast Guard in other major response events, such as Deepwater Horizon; where it was the primary tool providing Coast Guard and other support agency leadership a real-time picture of on-scene environmental information.

Among a number of future projects, the Coast Guard and NOAA are developing a focused approach on how to best handle the damage of wildlife in the areas of subsistence living in the northern Arctic region of Alaska during and following a spill event. The Coast Guard and NOAA are also collaborating on how to better integrate environmental information and intelligence to proactively support Arctic marine traffic safety as a whole.

The partnership between Coast Guard and NOAA continues to thrive and grow stronger as maritime and environmental conditions, caused by both natural and man-made effects, shift and change over time.

This story was first posted Feb. 17, 2017, on Coast Guard Compass, official blog of the U.S. Coast Guard as part of a series about all things cold weather – USCG missions, operations, and safety guidance. Follow the Coast Guard on Facebook, Twitter and Instagram, and look for more #belowzero stories, images, and tips!