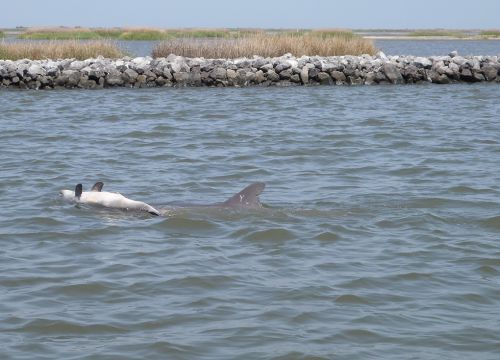 Dolphin Y01 pushes a dead calf through the waters of Barataria Bay, Louisiana, in March 2013. This behavior is sometimes observed in female dolphins when their newborn calf does not survive. Barataria Bay dolphins have seen a disturbingly low rate of reproductive success in the wake of the Deepwater Horizon oil spill. (Louisiana Department of Wildlife and Fisheries)

NOV. 4, 2015 — In August of 2011, a team of independent and government scientists evaluating the health of bottlenose dolphins in Louisiana's Barataria Bay gave dolphin Y35 a good health outlook. Based on the ultrasound, she was in the early stages of pregnancy, but unlike many of the other dolphins examined that summer day, Y35 was in pretty good shape. She wasn't extremely underweight or suffering from moderate-to-severe lung disease, conditions connected to exposure to Deepwater Horizon oil in the heavily impacted Barataria Bay. Veterinarians did note, however, that she had alarmingly low levels of important stress hormones responsible for behaviors such as the fight-or-flight response.

Normal levels of these hormones help animals cope with stressful situations. This rare condition—known as hypoadrenocorticism—had never been reported before in dolphins, which is why it was not used for Y35 and the other dolphins' health prognoses. Less than six months later, researchers spotted Y35 for the last time. It was only 16 days before her expected due date. She and her calf are now both presumed dead, a disturbingly common trend among the bottlenose dolphins that call Barataria Bay their year-round home. T

his trend of reproductive failure and death in Gulf dolphins over five years of monitoring after the 2010 Deepwater Horizon oil spill is outlined in a November 2015 study led by NOAA and published in the peer-reviewed journal Proceedings of the Royal Society. Of the 10 Barataria Bay dolphins confirmed to be pregnant during the 2011 health assessment, only two successfully gave birth to calves that have survived. This unusually low rate of reproductive success—only 20%—stands in contrast to the 83% success rate in the generally healthier dolphins being studied in Florida's Sarasota Bay, an area not affected by Deepwater Horizon oil.

While hypoadrenocorticism had not been documented previously in dolphins, it has been found in humans. In human mothers with this condition, pregnancy and birth—stressful and risky enough conditions on their own—can be life-threatening for both mother and child when the condition is left untreated. Wild dolphins with this condition would be in a similar situation. Mink exposed to oil in an experiment ended up exhibiting very low levels of stress hormones, while sea otters exposed to the Exxon Valdez oil spill experienced high rates of failed pregnancies and pup death. These cases are akin to what scientists have observed in the dolphins of Barataria Bay after the Deepwater Horizon oil spill.

Among the pregnant dolphins being monitored in this study, at least two lost their calves before giving birth. Veterinarians confirmed with ultrasound that one of these dolphins, Y31, was carrying a dead calf in utero during her 2011 exam. Another pregnant dolphin, Y01, did not successfully give birth in 2012, and was then seen pushing a dead newborn calf in 2013. Given that dolphins have a gestation of over 12 months, this means Y01 had two failed pregnancies in a row. The other five dolphins to lose their calves after the Deepwater Horizon oil spill, excluding Y35, survived pregnancy themselves but were seen again and again in the months after their due dates without any young. Dolphin calves stick close to their mothers’ sides in the first two or three months after birth, indicating that these pregnant dolphins also had calves that did not survive. At least half of the dolphins with failed pregnancies also suffered from moderate-to-severe lung disease, a symptom associated with exposure to petroleum products. The only two dolphins to give birth to healthy calves had relatively minor lung conditions.

Survival of the Least Oiled

Dolphin Y35 wasn't the only one of the 32 dolphins being monitored in Barataria Bay to disappear in the months following her 2011 examination. Three others were never sighted again in the 15 straight surveys tracking these dolphins. Or rather, they were never seen again alive. One of them, Y12, was a 16-year-old adult male whose emaciated carcass washed up in Louisiana only a few weeks before the pregnant Y35 was last seen. In fact, the number of dolphins washing up dead in Barataria Bay from August 2010 through 2011 was the highest ever recorded for that area. Survival rate in this group of dolphins was estimated at only 86%, down from the 95-96% survival seen in dolphin populations not in contact with Deepwater Horizon oil.

The marshy maze of Barataria Bay falls squarely inside the footprint of the Deepwater Horizon oil spill, and its dolphins and others along the northern Gulf Coast have repeatedly been found to be sick and dying in historically high numbers. Considering how deadly this oil spill has been for Gulf bottlenose dolphins and their young, researchers expect recovery for these marine mammals to be a long time coming. Watch an updated video of the researchers as they temporarily catch and give health exams to some of the dolphins in Barataria Bay, La., in August of 2011 and read a 2013 Q&A with two of the NOAA researchers involved in these studies.

This study was conducted under the Natural Resource Damage Assessment for the Deepwater Horizon oil spill. These results are included in the injury assessment documented in the Draft Programmatic Assessment and Restoration Plan that is currently out for public comment. We will accept comments on the plan through December 4, 2015. This research was conducted under the authority of Scientific Research Permit nos. 779-1633 and 932-1905/MA-009526 issued by NOAA's National Marine Fisheries Service pursuant to the U.S. Marine Mammal Protection Act.