In the wake of the 2010 oil spill on Adak Island, a field team member from the Alaska Department of Fish and Game breaks the ice to prepare a stream for sampling, in this case, for electrofishing. Field teams also were setting small fish traps, which do not require breaking up the ice like this. (NOAA)

APRIL 8, 2013 — In the center of Alaska's rugged Aleutian Islands is the sparsely populated Adak Island. It was here—in the middle of winter on Jan. 11, 2010—that workers at the Adak Petroleum Bulk Fuel facility were filling an underground tank with oil from the supply tanker Al Amerat. But as the tanker sat moored at the dock, its oil began overfilling the 4.8 million gallon underground tank.

Up to 142,800 gallons of #2 diesel flowed out of the tank and eventually into the nearby salmon stream, Helmet Creek. Just over a mile after the creek passes the oil storage facility, it enters the Adak Small Boat Harbor, which is open to Sweeper Cove's marine waters. Helmet Creek is equipped with gates that can partially close off the flow of the stream. That feature played to the response's favor because spill response personnel were able to use these gates, along with boom and absorbent materials, to contain most of the oil spill in the stream.

Only a small percentage of the oil reached the boat harbor and Sweeper Cove. However, Alaska, NOAA, and the U.S. Fish and Wildlife Service, as natural resource trustees, were concerned about injury to both the stream and marine habitats and began a Natural Resource Damage Assessment (NRDA) to investigate potential environmental impacts.

Ian Zelo, Oil Spill Coordinator for the Office of Response and Restoration's Assessment and Restoration Division, got involved the next day, Jan. 12, leading the NOAA team for this injury assessment. While the trustees were coordinating closely with the response, it was clear that they would need to send environmental assessment teams to the island to document the spill and its impacts on local habitats. However, there are only two flights to Adak each week. Zelo knew the next flight to the island was on Jan. 14 and his team needed to be on it. This meant he and the other natural resource trustees had only two days to plan the initial assessment, recruit a field team to take samples, assemble the equipment, and finalize a field sampling protocol. Zelo's role was to coordinate partners and tasks across two federal and four state agencies. On such a short time frame, they could not afford to work using the logical path we usually take: plan, recruit, gear up, and go. They had to scramble and do it all at once.

On the evening of Jan. 13, the assembled field staff had flown to Anchorage, Alaska, with their field gear and were staged there for the 2:00 p.m. flight the next day. A local laboratory would assemble the sampling equipment and have it ready to pick up the following morning. NOAA had a draft sampling protocol that would be finalized while the team was flying so they could be briefed on the details of their mission when they arrived. Things looked good. At 6:30 a.m. on Jan. 14, Zelo got a call from one of the field staff. She had a personal emergency and had to pull out of the mission. Suddenly, things did not look good.

To work safely and to accomplish the sampling goals, they needed four people on the team. He now had 8 hours to find another qualified person or cancel the mission. Working with state partners, he identified and spoke to an Anchorage-based consulting firm by 8:30 a.m. They identified a potential replacement and called him on his drive into the office. By 9:00 he was on his way back home to get ready. With a little over an hour before the flight took off, NOAA was able to get a contract in place to hire the consulting firm and buy the replacement's plane ticket. Once again, the mission was a go. 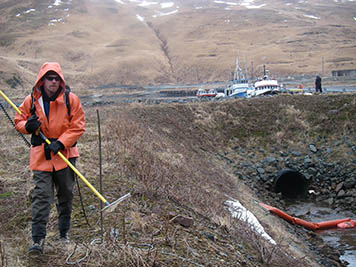 A member of the environmental assessment mission on Adak Island is holding the electrified wand and wearing the power pack for sampling fish via the electrofishing method. (NOAA)

Over the next five weeks, the natural resource trustees sent three field teams to Adak to assess injury caused by the oil spill. Zelo was on the second mission. During the assessment, the team fished both Helmet Creek and similar streams (for comparison) to document the fish communities. One of the methods they used is known as "electrofishing." A common research technique, it involves sticking an electrified wand in the water (while wearing rubber chest waders) to temporarily shock and disable nearby fish and allow them to be caught.

The field teams counted and collected fish for contaminant and developmental analysis. Mussels were collected from sites in and around Sweeper Cover and Finger Bay (a nearby bay farther than they thought the oil might travel, again, for comparison). Trustees also collected dozens of water and sediment samples and surveyed birds. During this assessment, the field teams had to deal with a few unusual challenges. They had to operate at night in order to work at low tide. They were excluded from Helmet Creek for half of the second assessment because the responders discovered unexploded ordnance (potentially explosive weapons), which had to be removed before the field staff could continue. They worked in streams that were partially or fully covered in ice, and on the final mission their assessment was interrupted by a blizzard. Their teams had to recover fish traps from under several feet of snow. 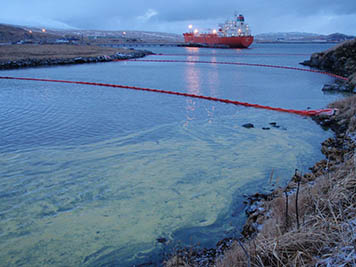 January 12, 2010 — Looking out on spilled oil and containment boom from the Adak Small Boat Harbor into Sweeper Cove and the fuel pier. (U.S. Fish and Wildlife Service/Lisa Stitler) 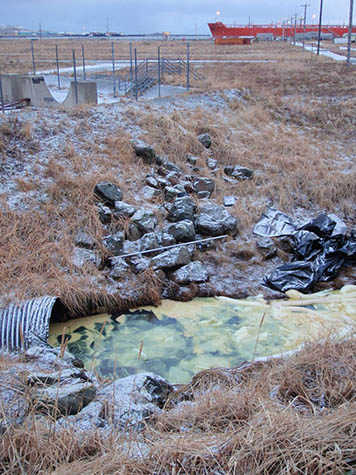 January 12, 2010 — A view of spilled oil next to a culvert in Helmet Creek, with the tanker that supplied the fuel in the background. Proposed restoration projects will benefit both salmon and the entire stream ecosystem. (U.S. Fish and Wildlife Service/Lisa Stitler)

In the summer of 2011, the trustees worked cooperatively with Adak Petroleum Bulk Fuel facility, the responsible party, on scoping restoration options. NOAA and the other trustee partners are now nearing a cooperative settlement with the fuel facility. They have reviewed possible restoration projects that could compensate the public for the injuries caused by the spill and have drafted a Damage Assessment and Restoration Plan [PDF] that is available for public comment. In the plan, they present their preferred restoration alternative, which includes a suite of projects to improve the overall quality of Helmet Creek.

Restoration is targeted at pink salmon but also will benefit the entire stream corridor. The proposed work includes restoring access to the creek for fish, removing barrels and other debris, and increasing water flow by plugging a culvert system that is drawing water from the stream. Their goal is to perform this restoration in the summer of 2013.

You can comment on the restoration plan until April 30, 2013. Send comments to: Ian Zelo NOAA Oil Spill Coordinator Assessment and Restoration Division 7600 Sand Point Way NE Seattle, WA 98115 Phone: 206.526.4599 Email: ian.j.zelo@noaa.gov Please provide a subject line, indicating that your comments relate to restoration planning for the Adak 2010 oil spill. Any comments received will become part of the administrative record. Please be aware that your entire comment—including your personal identifying information—may be made publicly available.