Booms, Beams, and Baums: The History Behind the Long Floating Barriers to Oil Spills

APRIL 28, 2014 -- One of the iconic images of spill preparedness and response is oil boom.

You've probably seen these long ribbons of orange, yellow, or white material stockpiled on a pier, strung around a leaking vessel, or stretched across a channel to protect sensitive areas threatened by an advancing oil slick.

Made of plastic, metal, or other materials, booms are floating, physical barriers to oil, meant to slow the spread of oil and keep it contained.

As we describe on our website, there are three main types of boom:

Hard boom is like a floating piece of plastic that has a cylindrical float at the top and is weighted at the bottom so that it has a "skirt" under the water. If the currents or winds are not too strong, booms can also be used to make the oil go in a different direction (this is called "deflection booming").

Sorbent boom looks like a long sausage made out of a material that absorbs oil. If you were to take the inside of a disposable diaper out and roll it into strips, it would act much like a sorbent boom. Sorbent booms don't have the "skirt" that hard booms have, so they can't contain oil for very long.

Fire boom is not used very much. It looks like metal plates with a floating metal cylinder at the top and thin metal plates that make the "skirt" in the water. This type of boom is made to contain oil long enough that it can be lit on fire and burned up.

But why is it called "boom"? Does it make a sound? Every industry has jargon, and the spill response community, at the intersection of the maritime and oil industry, has more than its fair share. There are whole dictionaries devoted to maritime terms, and others devoted to the oil industry. (Remember "top kill" and "junk shot"—industry terms used to describe attempts to stop the flow of oil from a damaged wellhead?)

But when the Office of Response and Restoration's Doug Helton looked for the origins of the word "boom," he had to do some digging. Apparently boom is such a common term in the response business, nobody thinks much about its derivation. Kind of like asking a chef why spoons are called spoons.

The word "boom" is the Dutch word for tree. German is similar: "baum." Remember "O Tannenbaum," a Christmas carol of German origin? From these roots, we get the word "beam" as in a long wooden timber, and of course, a part of a sailboat, the "boom," that holds the foot of the sail and was traditionally made of wood. Around the Northwest it is pretty common to see a tug boat pulling a big raft of logs to a mill—a log boom.

But what do trees have to do with oil boom? Back to the Dutch. In the Middle Ages, logs were chained together and used as a floating barrier across a waterway to protect a harbor from attack or to force passing ships to stop and pay a toll. During the American Revolution, for example, the Hudson River was boomed with logs to prevent the British from sailing upriver. Similar fortifications were used during the Civil War, and even in World War II to protect U.S. West Coast ports from foreign submarines. 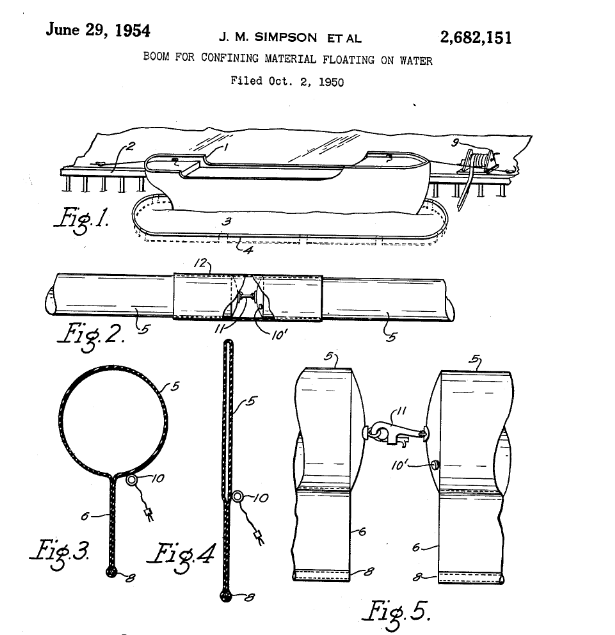 An early oil containment boom design from the archives of the U.S. Patent and Trademark Office. (U.S. Department of Commerce)

How log booms evolved into oil containment booms is unclear, but we know that every major spill has resulted in a flurry of inventions and improvements, often on the fly as responders adapted available resources to combat the spill. As concern over oil pollution increased over the past century, some of these were patented and form the basis for today’s technologies, but unfortunately there is still no silver bullet; once oil is spilled in the sea, it is a challenge to control and clean up.

Learn more about how responders use boom during oil spills [PDF], including the ways to use boom effectively. 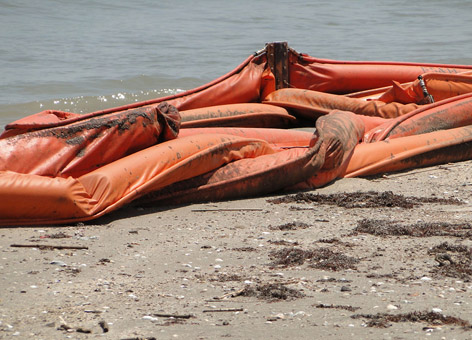 Oiled boom is cleaned so that it can be used to contain oil over and over again. (NOAA) 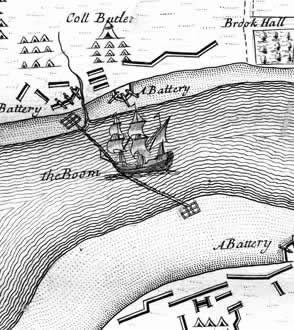 A map showing the use of boom to block ships during the siege of Londonderry in Britain. (Wikipedia Commons)
Back to top