This is the second in a series of stories about Arctic Shield 2013. Read the first story, "Arctic-bound." SEPTEMBER 30, 2013 -- Fog and snow obscure the tundra below as the plane descends. The seat belt sign goes off and a man reaches for his bag in the overhead bin, the quote on the back of his shirt spelling out just how far Zach Winters-Staszak now is from Seattle: "Vegetarian. An ancient tribal slang for the village idiot who can't hunt, fish or ride." A mapping specialist for NOAA's Office of Response and Restoration, Winters-Staszak has returned to Barrow, Alaska, top of the world for now, but he has higher latitudes in his future. On previous trips to Barrow, the village was blanketed by snow, chilled by negative air temperatures, and surrounded by coastal sea ice. As he steps out from the baggage claim, the air is balmy and the landscape is thawed, leaving only mud and gravel for him to drag the now-useless wheels of his luggage and heavy equipment case across. When Winters-Staszak arrives at the hotel lobby, he hears familiar voices from conference calls over the last few months as they prepared for this logistically complex undertaking, and he quickly begins to put faces to names and voices.

Top of the World

In a previous story, Winters-Staszak gave a brief overview of his involvement in the oil spill training exercise Arctic Shield 2013. He was joining scientists, analysts, the United States Coast Guard (USCG), and the crew aboard the USCG Cutter Healy to demonstrate the capabilities of oil spill response technologies in the remote and challenging environment of the Arctic Ocean. But first, here is the behind-the-scenes story of his life aboard the Coast Guard icebreaker—because this was no ordinary "office" for this work. They would travel north up and over the broken sheets of Arctic sea ice before turning south through the Bering Sea, east to the Gulf of Alaska and finally dock in Seward, Alaska. Even though Winters-Staszak has been there before, Barrow still retains an uncompromising allure. Bowhead whale bones, baleen, umiaqs (seal-skin hulled canoes used for spring whaling), and caribou pelts can be seen at every turn, affirming the traditional ways synonymous with Arctic communities—as well as what's at stake if a major oil spill occurred here. Each time he comes to Barrow, he makes a point to visit the Iñupiat Heritage Center. Local subsistence hunters and community elders can be found there, continuing to create the traditional tools and artwork they have for centuries. As he listens to stories of generations of hardship and perseverance on the ice, he's quickly reminded of what's at stake and why it's imperative to be ready to protect the natural resources they rely on.

Cultural tourism has become a major draw to Barrow but is perhaps overshadowed by the destination itself. From a geographical and strategic standpoint, Barrow is a major checkpoint for international travel by sea. 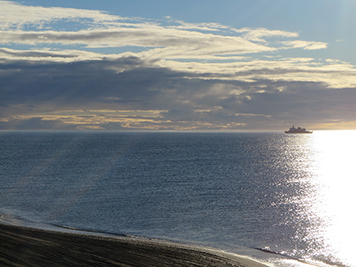 During Winters-Staszak's time in the village, there was a German cruise boat traveling through from the Northwest Passage and Greenland that anchored just offshore and was busy unloading European tourists by Zodiac. This alone highlights the importance of field demonstrations like Arctic Shield. Transportation activities for tourism and commerce are increasing in the region, escalating the risk of oil spills and accidents. Ironically, the Healy is anchored just offshore as well, giving the team a spectacular view into their next couple weeks.

Working Aboard an Icebreaker

When you're on a ship, you have no choice but to eat whatever the galley serves up, three times a day. The Coast Guard puts Sriracha hot sauce on everything: eggs (makes sense), grilled cheese (OK), the hardly identifiable steamed broccoli (understandable), and chicken marsala (not so sure). As Winters-Staszak gets to know both the crew and the science team after one such meal, questions about the Healy itself come up. The galley chief quickly proclaims, "Have you seen the engine room? We call it PFM or Pure Freaking Magic. The Healy generates more power than the whole village of Barrow." To put that in perspective, Barrow is the largest village on Alaska's North Slope, with a population over 4,100 people. 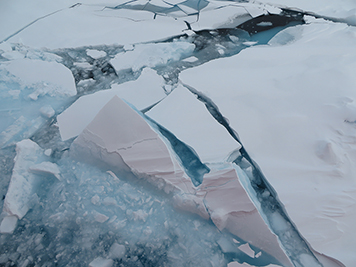 The Coast Guard Cutter Healy could plow through ice up to 4.5 feet thick. (NOAA)

Essentially, the ship itself is a floating village. The Healy has amenities to support over 100 people, makes ample (and screaming hot) fresh water on site, and houses multiple scientific laboratories with a combined area of 4,200 ft2. Designed to operate in temperatures down to -50°F, the Healy can break 4.5-foot-thick ice continuously and has the capacity of backing and ramming 8-foot-thick ice. Indeed, watching chunks of ice the size of minivans come rolling up from under the bow of the ship is impressive. The sound of breaking ice from below deck is at first nerve-racking, but eventually it actually begins to lull the Healy's passengers to sleep at night. Then, just as soon as the landscape of fragmented sea ice and frigid temperatures becomes familiar, it vanishes. The morning after completing the response technology demonstrations, Winters-Staszak wakes up and the ship has turned south. They have escaped the ice floe and are once again surrounded by open ocean. Walruses and whales swim by, understandably in a hurry considering a 420-foot red island is steaming in their direction at 14 knots. As they pass through the Bering Strait, Russia comes into view. And as they travel through Unimak Pass, the Aleutian Islands, and on to Seward, Winters-Staszak takes in the unforgettable landscapes that he hopes their preparations during Arctic Shield will help protect.

Left, a walrus was spotted swimming near the icebreaker on the journey through the Arctic. (U.S. Coast Guard/James Finta) Right, the sun sets over the Aleutian Islands as the icebreaker passes through on the return voyage to Seward, Alaska. (NOAA)

Stay tuned for the next update from Arctic Shield 2013, when we'll give an in-depth look at the critical response technologies demonstrated on the Healy, some humbling insights for Winters-Staszak to consider as an oil spill responder, and an update on whether his personal goal to see a polar bear remained elusive. Editor's Note: September is National Preparedness Month. It is a time to prepare yourself and those in your care for emergencies and disasters of all kinds. This story follows one way NOAA's Office of Response and Restoration is preparing for a potential oil spill emergency in the Arctic. To learn more about how you can be prepared for other types of emergencies, visit www.ready.gov. 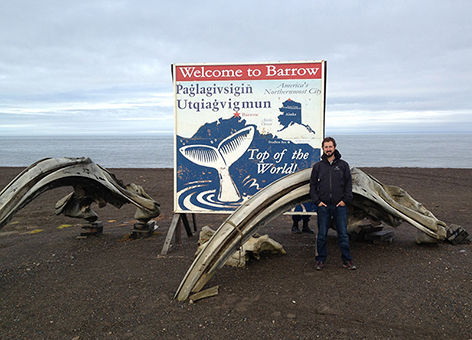 Bowhead whale bones and a sign announcing Barrow as the northernmost city in America welcomed Zach Winters Staszak to the Arctic. (NOAA) 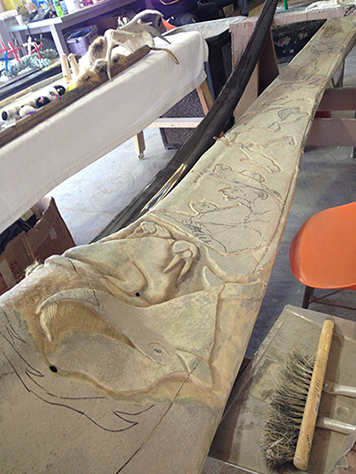 At the Iñupiat Heritage Center in Barrow, Alaska, you can see local artists carve traditional icons into the jawbone of a bowhead whale. (NOAA)
Back to top