To Bring Back Healthy California Ocean Ecosystems, NOAA and Partners Are "Planting" Long-Lost Abalone in the Sea

JULY 13, 2015 -- They weren't vegetables but an excited group of scuba divers was carefully "planting" green abalone in an undersea garden off the southern California coast all the same. Green abalone are a single-shelled species of sea snail whose population has dropped dramatically in recent decades. On a Wednesday in mid-June, these oceanic "gardeners"—NOAA biologist David Witting and divers from The Bay Foundation—released over 700 young green abalone into newly restored kelp forest areas near Palos Verdes, California. This was the first time in over a decade that juvenile abalone have been "outplanted," or transplanted from nursery facilities, to the wild in southern California. This ongoing project is a partnership between NOAA, The Bay Foundation, Redondo SEA Lab, The Nature Conservancy, and the California Department of Fish and Wildlife. Spawned and reared at The SEA Lab in Redondo Beach, California, all of the juvenile abalone were between two and four years old and were between a quarter inch and 3 inches in size. Biologists painstakingly tagged each abalone with tiny identifying tags several weeks prior to their release into the wild. Leading up to outplanting day, microbiologists from the California Department of Fish and Wildlife had to run rigorous tests on a sample of the juvenile abalone to certify them as disease-free before they were placed into the ocean. Several days before transferring them, biologists placed the abalone in PVC tubes with netting on either end for easy transport. "This was just a pilot outplanting with many more larger-scale efforts to come in the near future," stated David Witting from NOAA's Restoration Center. "We wanted to go through all of the steps necessary to successfully outplant abalone so that it would be second nature next time." Marine biologists from The Bay Foundation, along with Witting and other NOAA biologists, will be going out over the next six to twelve months to monitor the abalone—checking for survival rates and movement of the abalone. "We expect to find some abalone that didn't survive the transfer to the wild but probably a good number of them will move into the cracks and crevices of rocky reef outcroppings immediately," according to Witting.

All seven abalone species found along the U.S. West Coast have declined and some have all but disappeared. White and black abalone, in particular, are listed as endangered through the Endangered Species Act (ESA). Three abalone species (green, pinto, and pink) are listed as Species of Concern by NOAA Fisheries, a designation meant to protect the populations from declining further and which could result in an ESA listing. The two remaining abalone species, reds and flats, are protected and managed by states along the U.S. West Coast. Historically, the main cause of abalone’s demise was a combination of overfishing and disease. Today, many other threats, such as poaching, climate change, oil spills, and habitat degradation, contribute to the decline of abalone and could impact the health of future populations. The recent green abalone outplanting was one of the many steps needed to advance the recovery of all abalone species. Methods for rearing and outplanting are first being tested using green abalone because this species is more abundant in the wild. Once the methods are refined, they then will be employed to recover endangered white and black abalone—both species which are currently living on the brink of extinction.

What the Future Holds

Left, after testing and refining the techniques to boost the population of green abalone in the wild, scientists then will apply them to help endangered white and black abalone species recover. (NOAA) Right, a young green abalone, reared in a lab in southern California, grazes on red algae. Raising these sea snails in a lab requires a lot of resources, prompting scientists to explore other approaches for boosting wild abalone populations. (Credit: Brenda Rees, with permission)

In particular, biologists are hoping to refine a technique they are coining "deck-spawning" as a way to outplant abalone in the future. Maintaining abalone broodstock and rearing them in a lab requires a lot of resources, funding, and time. This monumental effort has spurred biologists to develop an initially successful, alternate approach, which involves inducing mature, wild abalone to spawn on the deck of a boat. The scientists then take the viable abalone larvae that develop and release them in a habitat where the young abalone are likely to settle and thrive. Immediately after spawning, the parent abalone can then be returned to the wild where they can continue to be a component of the functioning ocean ecosystem. The green abalone outplanting project is part of a broader effort to restore abalone but is also playing an important role in work being led by The Bay Foundation with NOAA's Montrose Settlements Restoration Program to restore southern California's kelp forests. In southern California, fish habitat has been harmed by decades of toxic pollution dumped into the marine environment. After clearing areas that would be prime kelp habitat if not for the unnaturally high densities of sick and stressed sea urchins, NOAA, The Bay Foundation, and several more partners have seen kelp bounce back once given relief from those overly hungry urchins. While abalone also eat seaweed, including kelp, they are a natural competitor of urchins in this environment and will help keep urchin populations in check, ultimately allowing a healthy kelp forest community to return. Watch as divers transport the young abalone using PVC tubes and release them on the rocky seafloor off California's coast: 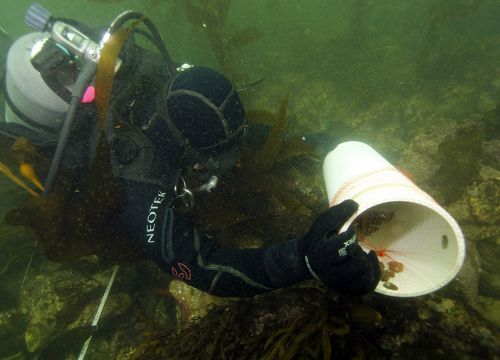 A diver places a PVC tube filled with young green abalone -- sea snails raised in a lab -- on the seafloor off the southern California coast. (NOAA)

Top: NOAA scientist Dave Witting holds a red algae-covered rack that the young green abalone feed on while being raised in the lab. (Credit: Brenda Rees, with permission) Bottom: Some of the larger, older examples of green abalone raised in the lab soon after their release. Scientists painstakingly glued tiny identifying tags to each snail to track their progress after release. (NOAA)
Back to top