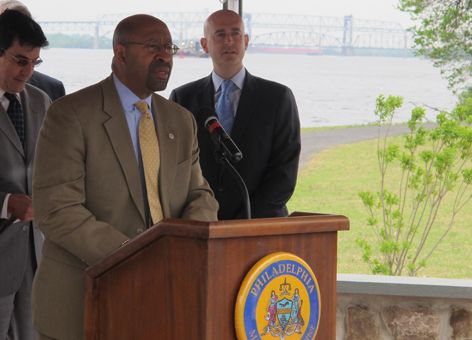 MAY 18, 2012 -- If you visit the waterfronts of many cities in the U.S., you will find a common scene: abandoned eyesores with artificial, hardened, and denuded shorelines. They attract trash, invasive species, and crime and repel just about everything else. But where some see ecological and economic wastelands, others envision tremendous opportunities for reviving coastal communities. We were there at the invitation of the Delaware River City Corporation and Pennsylvania Environmental Council, two of a series of partners who were interested in transforming this urban wasteland into a jewel—a waterfront park that would provide the public with a rare amenity: safe and attractive access to the Delaware River. It also had the potential to serve as a model for reclaiming blighted city shorelines. At the time, NOAA and co-trustee agencies from Pennsylvania, New Jersey, Delaware, and the U.S. Fish and Wildlife Service were looking for restoration projects that could help offset the environmental impacts from the 2004 release of 265,000 gallons of oil from the tanker M/V Athos I. Some of the oil washed up on these shorelines, and we were interested in options for reversing some of the harm. As we walked around and listened to the park’s proponents, I admit that it was tough to imagine how this dump site, full of concrete rubble and weeds, could be turned into a park. But the more we listened, the more we realized that they had a vision, a plan, and a passion for returning the shoreline to the people. The trustees agreed to partner with the Delaware River City Corporation by contributing part of the settlement from the Athos oil spill to add a living shoreline to the park, including wetland plantings. Now, four and a half years later, I was back on May 14 to witness the grand opening of Lardner's Point Park. This 4.5-acre riverfront oasis is Philadelphia's newest park and includes a river overlook, fishing pier, picnic tables, connections to a trail system, riverbank forest, and a living shoreline with tidal wetlands. 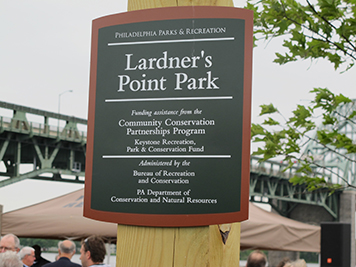 On that blustery day in May, the visionaries were out in force to recognize the accomplishment of a dream come true, including Philadelphia Mayor Michael Nutter, Rep. Allyson Schwartz, former Rep. Robert Borski, and other state and local officials and community groups. The famous Philadelphia Mummers provided entertainment. Another guest that showed up unannounced was a rare and threatened Pennsylvania red-bellied turtle, which was seen visiting the newly restored shoreline habitat. In an effort to continue this momentum, NOAA is also coordinating with other federal agencies, the city, and community groups in preparing an application for Philadelphia to become an Urban Waters Federal Partnership site, a program under America's Great Outdoors Initiative. We look forward to future successes in restoring urban waterfronts and ecological and economic benefits to more coastal communities. By Tom Brosnan, Communications Branch Chief in the Office of Response and Restoration's Assessment and Restoration Division Editor's note: Learn more about NOAA's longstanding efforts to clean up and restore the Delaware River and see the amazing transformation of Lardner's Point in these before and after photos. 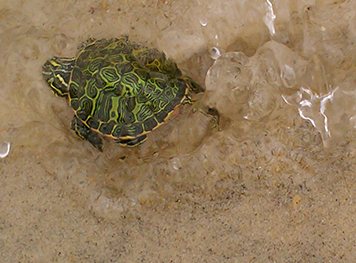