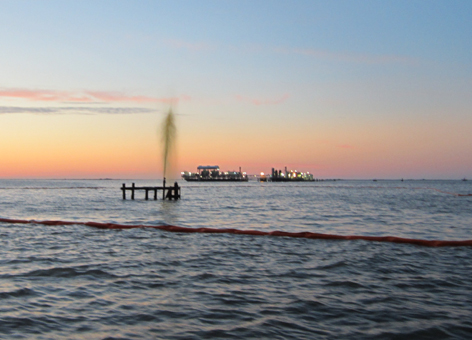 MARCH 1, 2013 — A damaged wellhead leaking an oily mixture in the Mississippi River Delta has been successfully capped after two days. The U.S. Coast Guard in New Orleans contacted NOAA and the Office of Response and Restoration on February 26 after a 42-foot crew boat owned by Swift Energy collided with an inactive wellhead in Lake Grande Ecaille, a saltwater bay approximately 11 miles west of Empire, La. The wellhead was broken and began releasing a combination of oil and water, though the exact content of the release is not known. Containment booms and skimming equipment have been deployed to limit the extent of the oil spill and begin cleaning it up.

According to the Coast Guard, “The estimated maximum potential discharge from the wellhead was fewer than 1,260 gallons of crude oil and 1,134 gallons of oily water per day.” The well has been inactive for about six years, and no flow lines are attached, reducing the risk of further oil being released and indication of well abandonment. Office of Response and Restoration emergency response staff have provided oil spill trajectories forecasting the path of the oil and offered counsel on environmental resources at risk to help the Coast Guard know where the oily mixture is likely to go and what habitat is in need of protection.

There has been a concern about a potential health and fire hazard posed by hydrogen sulfide released in the oil. This area is a known "sour" crude oil field which contains hydrogen sulfide (a toxic gas). The well was capped and secured the afternoon of Thursday, February 28.