Building Relationships out on the Ice in the Arctic Circle 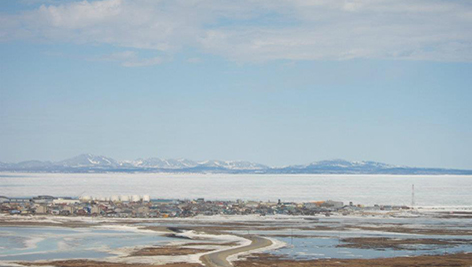 JUNE 8, 2012 -- It's difficult to appreciate fully the challenges of dealing with an oil spill in Arctic conditions until you venture for yourself above the Arctic Circle to a remote village such as Kotzebue, located on Alaska's northwest coast. There you can see some of those challenges first hand. A handful of Office of Response and Restoration staff recently converged up north to attend a workshop on involving the community not only when responding to oil spills but also when measuring and restoring the resulting damage to natural resources. Due to the prospect of increased ship traffic and offshore oil drilling in Arctic regions, the risk of an oil spill in Arctic waters is growing. As a result, Alaska's Northwest Arctic Borough sponsored this workshop to discuss oil spill response and restoration issues. NOAA attended along with several other state and federal agencies, and the Coastal Response and Research Center facilitated the meeting.

The workshop also included discussions about how to integrate local community knowledge into the newly released Arctic Environmental Response Management Application (ERMA), an online mapping tool that integrates different types of environmental information for decision makers during disasters. Located 33 miles north of the Arctic Circle, Kotzebue is a hub of travel for this area of Alaska, allowing participants from 11 villages in the Northwest Arctic Borough to attend this workshop. During the course of the meeting, community members from Kotzebue and surrounding villages expressed concerns about oil spill response capabilities and how a spill would affect their subsistence lifestyle. These initial discussions are extremely useful in NOAA's efforts to broaden our understanding of how people are so closely tied to and dependent on natural resources in the Arctic—and how we would be able to evaluate those connections in case an oil spill interfered with them. The most important goal of the workshop that we were able to achieve was to enhance relationships and the knowledge exchange between local Alaskan communities and government agencies. 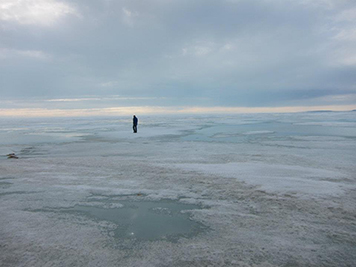 Venturing out onto the ice. (Elspeth Hilton)

One way to picture the value in these relationships is to imagine venturing out onto the vast sea ice next to Kotzebue. This is a thick layer of ice frozen over the Arctic Ocean. Some of us visiting NOAA staff saw snowmobilers and skiers speed across it, and we observed numerous small groups ice fishing on it. Two days later, the first layer of snow on the ice had firmed up, enabling us to walk out onto it without sinking up to our knees in snow. The big question was, How safe was it? We could see some cracks in the ice, but two days ago it was being heavily used. Even though there was no one out on the ice at the time, eventually we deduced that it was safe.

Very timidly, we walked out onto the sea ice, but no issues arose except cold fingers. What we needed and desired, however, was guidance from the locals who knew the ice. Those who live in this amazing corner of the world know the status of the ice and would have been able to direct us if there were any safety problems. This experience, although on a very small scale, can be compared to the objectives of this workshop. One of the central goals was to start building relationships between those who know the local environments with those emergency responders and restoration experts who will need their guidance and expertise if an oil spill does occur. 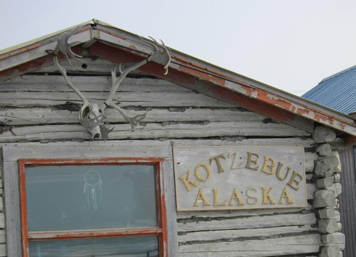 A classic building on the Kotzebue waterfront. (Elspeth Hilton)
Back to top